I need a Mallam as husband – Chelsea Ezerioha 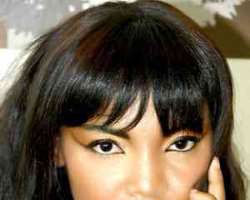 After the role she played in Vivian Ejike's “Silent Scandals” movie, where she acted alongside A-list actors like Genevieve Nnaji, Majid Michel, Uche Jumbo and many others, pretty Chelsea Ada Ezerioha has become one of the hottest faces in Nollywood.

Only last year, she won three awards to her credit; AMAA- Most Promising Actress award (2010) BON- Revelation of the Year award and Best Upcoming Actress award. The awards gave an edge over her contemporaries in the industry. In this encounter, Chelsea sets an agenda for herself, as she declares “ I'm undergoing a process of discovering myself.'

You won three awards last year, how were able to achieve this feast within the short period you spent in the industry?

I started out as a model before veering into acting. Then I was an undergraduate of English Language at the University of Maiduguri. My new found fame jolted my parents who insisted I complete my education first before going into modeling.

I was chosen as a Visa phone model during the company's launch campaign in Benin some years ago.
I also did a couple of calendars jobs for some corporate bodies.

While growing up, I was always inspired by visually stimulating events. I remembered always getting engrossed in movies and cartoons as a child. And as I got older, my fascination for the arts developed.

My passion for the arts pushed me to obtain a degree in English Language. And shortly after graduation, I went straight to the movie industry. And within a short time, I landed a role that had me rubbing shoulders with two of the finest actors f my generation, Genevieve Nnaji and Majid Michel.

Why did you abandon modeling for acting?

I have always been passionate about the art. And while in school, I was coming to Lagos for auditions. Initially, I was involved in a production by Emem Isong between 1997 and 1998, but because of my hunger for education, I could not be part of that production.

But in 2009, I got a phone call from a female producer, Vivian Ejike, who invited me, to be part of the cast of her 'Silent Scandal” movie. She claimed she got my phone number from Emem Isong . After the audition, the rest is history.

“Silent Scandals” was the movie that exposed me. My role in the movie required a lot of depth, intellect and self-confidence. The role I played was also very challenging and today it changed my whole perception about life. Still, it continues to drive me every day to become better at my craft.

As a new product, I need to be careful so as to maintain the standard I have set for myself.

After “Silent Scandals,” what other movies have you done recently?

I have done two more movies, and they are yet to be released into the market.

You spent a greater part of your life, living in the north?

Yes, I grew up there, living with my parents. Hausas are very nice people. Born in the north, I have never known any other culture apart from that of the Hausas.

Though my parents hail from Umuahia in Abia State, I'm more at home with the Hausas. If I'm opportune to return to the North by way of marriage, well, I will not hesitate to do so.

Hard work, and consistency. I'm inspired by those before me. Genevieve is my role model.

Her success is driven by hard work and that's the kind of impact I want to make in the industry.

Once one is passionate about what you do, the sky will be your limit. I know where I want to be. Because I'm focused and determined, I'm sure to make my mark in the industry.

The man who must be intellectually sound and honest. I can't stand dishonest people. They have no place in my heart.

Is that kind of man already existing in your life?

Don't you think that you are ripe for marriage?

For now it is not part of my agenda. I'm still discovering myself. I'm not thinking of getting married at the moment. We grow every day and as we do so, we discover new things about ourselves. I'm still growing, and I'd have a desire to become a true professional.

And what part of the body would you consider as your greatest asset?

My eyes are my assets.

As a pretty lady I'm sure you have broken so many men's heart . . .

I have not broken anybody's heart, and I'm not thinking of doing in future.

So, how many passes do you get in a day?

As many as you can think of. But I know that on daily basis I get lots of passes from men.