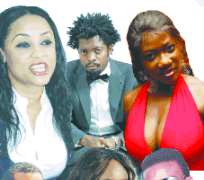 Mercy Johnson
Tired of the controversies trailing her, Mercy Johnson last year hired a respected public relations firm in Lagos to reposition her. Now, almost free of scandals, the well-endowed actress is a celebrity to watch in 2011. Her plans to shoot her movie should place her on a higher level provided she translates her acting prowess into directing.

Emem Isong
She has acquired a near-perfect reputation as a producer of note in the industry having produced block buster movies over the years. Movies from her Royal Arts Academy, her pet project, with the collaboration of Desmond Elliot , Uche Jombo and her sister, will undoubtedly make news this year.

Van Vicker
He remains one of the few actors that have a large fan base in Nollywood and Ghollywood. He was commended during the year for his foundation, the Van Vicker Foundation. The handsome actor should make news in the year for a movie he is about to shoot.

Basket Mouth
Year 2011 spells big for newly married comedian, Basketmouth. His show, 'Lord of The Ribs' has set a new standard for comedy in Nigeria. This year should be better as Globacom telecommunications will be sponsoring the show.

Lilian Bach
Her fans and movie enthusiasts will be seeing more of her creativity . The delectable actress has promised the movie industry at least four movies in 2011.

Kene Mparu
He has been in the news since he successfully ran the affairs of Island Cinema and Genesis Cinema. Movie lovers are on the looking-out to see if the former Genesis honcho will fulfil his promise of incorporating Film House, a chain of cinema houses across Nigeria this year.

I-Cinema
A new entrant in the cinema business, I-Cinema is certainly something to look out for in the year. It's location in Port Harcourt has won the cinema huge patronage in the South-South.

GEJ's $200 promise
A major issue that will grab headlines this year is the N200 million President Goodluck Ebele Jonathan promised the entertainment industry . If he fulfils his promise, crisis may ensue on who gets what from it.

AGN
The crisis in the Actors Guild of Nigeria continues as Emeka Ike has gone to court to challenge Segun Arinze's claims to the presidency of the guild. The court has however implored the guild to maintain status quo. Who knows the court's verdict might favour Emeka.

Kunle Afolayan
Rumour has it that the banker-turned actor and movie director, Kunle Afolayan, is planning to release a new movie in the course of the year. Going by his first two movies, Irapada and Figurine, Kunle Afolayan is a man to watch this year.

Terry G
After being signed-on by Now Muzik, Terry G has left many wondering what should be expected from him during the course of the year. Will he become more 'like it' or will he continue with his trademark? It's anyone's guess isn't it.

Future Awards
After allegations of bribe-for-award that trailed the Future Wards which is an annual event , youths are looking forward to Future Awards to keep hope of youths alive and praying that organizers will not disappoint them as Dynamix did.