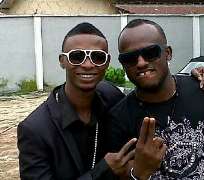 Comedians 'I go dye' and his colleague 'I go save' were yesterday beaten by Soldiers at a PDP rally in Warri, Delta State.

The Rally had prominent dignitaries in attendance including President Goodluck Jonathan and security was water tight, Soldiers, SSS men, mobile policemen , the Joint Military Task force was on full alert to prevent any breach of peace owing to the incessant bomb attacks, Our Source couldn't immediately ascertain what led to the assault on the comedians but people the claimed that the Comedians looked and acted like ruffians and all effort to identify themselves to the Military men fell on deaf ears.

Ace Comedian, Ali Baba was said to be bitter about the Fiasco and have complained to the Organisers