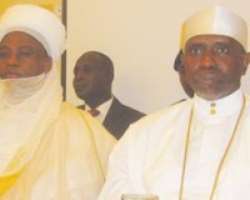 Ask govt to arrest perpetrators
'Alleged group behind blasts fake'
LEADERS of Christianity and Islam, Nigeria's two dominant religious groups, were yesterday united in condemning the perpetrators of the Christmas' eve bomb blasts in Jos, Plateau State and burning of churches and killing of worshippers in Maiduguri, Borno State.

They said the violence was politically motivated but with religious colouration. The masterminds, they added, 'want to make Nigeria ungovernable at all cost.'

At a joint press conference in Lagos yesterday, the Sultan of Sokoto and President General, Nigerian Supreme Council for Islamic Affairs, Alhaji Mohammad Sa'ad Abubakar III and the President of the Christian Association of Nigeria, Pastor Ayodele Joseph Oritsejafor, who reacted to the twin incidents, warned that 'the seemingly unending killings and violence in Jos must stop immediately.'

The religious leaders, who met under the platform of the Nigeria Inter-Religious Council (NIREC), which both they are co-chairmen, charged the appropriate authorities to check the trend and bring the perpetrators to book.

According to the duo, now that NIREC is 'building up a new culture of tolerance, peace and unity among religious adherents in the country,' no Nigerian must resort to killing of fellow citizens and destroying their property under any guise.

Although, the seed of the press conference, according to Abubakar and Oritsejafor, was sown more than two weeks ago in London during an inter-religious conference involving the two leaders and specifically to address issues on the state of the nation, last week bombings in Jos evoked harsh commentary from the council.

In a statement read by the National Co-ordinator/Executive Secretary of NIREC, Prof. Is-haq Olanrewaju Oloyede, Vice Chancellor of the University of Ilorin (UNILORIN), 'NIREC was stunned and disturbed by the latest bombings in some parts of Jos, Plateau State on the eve of Christmas, resulting in the death of innocent persons and leaving several others injured with a lot of property destroyed.

'As a deterrent to others, who might be planning any of such devilish things in future, the council calls on the relevant authorities to fish out the perpetrators of this dastardly act and bring them to book without further delay.

'It is sad that in spite of all the efforts of the Council as well as other stakeholders in restoring lasting peace in Jos, it has degenerated into deep ethnic hatred with religious colourations.'

The body, therefore, condemned the killings as well as the alleged reprisal attacks by Boko Haram sect in Maiduguri. 'It is ungodly, barbaric and inhuman to take life of a fellow human being unjustifiably.'

While extending its condolences to the families of the victims, NIREC urged the Plateau and Borno State governments 'in conjunction with security agencies to ensure protection of life and property of the citizenry.'

The Sultan, apparently worried by the consistent crises in the country, appealed to Nigerians to fear God and tolerate their neighbours.

Some national newspapers (The Guardian not included), stated that a group identified as Jama' atu Ahlus-Sunnah Lidda' Awati WalJihad, claimed the responsibility in a statement posted on its: website (http://mansoorah.net/sb_attacks.php)

The Sultan said: 'It is political with religious colouration. I have said it several times, whenever a Muslim slaps a Christian and they started fighting, they will say it is a religious crisis. We need to really go deep down to know what is causing these crises, and this onus lies on our government to fish out the perpetrators…. with all sincerity, if I tell you it is political I mean it and I know what I am saying. The leadership in that area should be bold enough to identify the perpetrators… there is limit to what we at NIREC can do, we can only talk, but government has more responsibility,' he said.

The monarch, described as 'unfortunate,' a situation whereby the perpetrators (suspected to be politicians) are using innocent Nigerians to make their ways, adding that he had discussed with the President, who has promised 'to get to the root of the matter.'

To Oritselafor, 'what has happened in Jos is political, although, it has a very strong dose of religion. Look at what happened in Maiduguri, where a pastor and his colleagues were killed. It showed that there is a heavy dose of religion in it. There are people in the country, who do not want peace to reign, who do not want elections to hold, so they have devised strategies to make this country ungovernable. Most Nigerians want elections to hold next year and our advice to them is to uphold 'RSVP' strategy, which means 'Register, Select, Vote, and Protect' your votes.'

He therefore appealed to Nigerians to shun violence and always expose anybody suspected to be engaging in any activity that may be detrimental to the peace and security of the nation.

Enjoining all religious leaders to preach peace and tolerance, Oritsejafor said Nigerians should pray for the country at this trying period.

He proposed that all Nigerians, both Christians and Muslims should begin to fast on the first day of every month in the coming year, beginning from January 1, 2011.

To have free and fair elections in 2011, he said, the government has a vital role to play, as it is expected to fully equip and empower the security agencies, while the outfits also needed to improve on their intelligence gathering.

He faulted the security agencies on the violence, which he said, could have been curtailed, if adequate measures were in place. 'From, what we saw and gathered, they have not done their job very well,' he said.

Earlier in Kaduna, the Sultan had condemned the Jos explosions, asking the Federal Government to ensure that the perpetrators of the dastardly acts are not spared.

In a statement on behalf of JNI, after a meeting of the group, its Secretary-General, Dr. Khalid Aliyu Abubakar, said the Sultan of Sokoto 'condemns in strong terms the ugly occurrence of crisis in Jos, Plateau State of Nigeria after a series of committed efforts to forestall peace and harmony in the state.'

Abubakar, also advised the government to put appropriate measures to restore normalcy to the state to guard against future occurrence.

'We call on Muslims to remain calm and continue praying to Allah the Most High for ease and relief to the affected victims of the crisis,' the statement added.

There was still tension around Gada-Biu in Jos yesterday where the explosions took place last Friday.

According to the Special Task Force (STF) spokesman, Captain Charles Ekeocha, there was a minor misunderstanding between a soldier and some youths and it was resolved immediately. 'We are being very careful because if we arrest now, they will say we have come again, Everything is calm now.'

However, one soldier was arrested by the Police yesterday in Anglo-Jos for shooting and wounding a resident. The Private was deployed to Port Harcourt, River State but hurriedly came to Jos to allegedly carry out the evil deed. Police confirmed it.

Also, youths from Jenta Adamu area marched to the Plateau State Police headquarters to protest what they called the 'extra-judicial killings' of their people by soldiers. They could not mention the number of people the soldiers killed.

But the Police Commissioner, Mr. Abdulrahman Akano, assured them that it would not happen again and they dispersed.

Gambo had given 80 as the current figure of people who died from the Christmas' eve explosions.

Three youths were allegedly shot by soldiers yesterday near the scene of the Friday blasts. It was learnt that they were receiving treatment at an undisclosed hospital. The youths who have always gathered at the spot of the blast, were accusing the soldiers of not handling the explosions issues well. This was said to generate into an argument between the soldiers and the restive youths, who allegedly attempted to seize the troops' rifles, forcing the soldiers to shoot at them.

When contacted on the incident, STF Commander, Brig-Gen. Hassan Umaru, simply said he would call back.

The STF spokesman, Captain Charles Ekeocha, also denied that his boss, ever spoke with any journalist on a shoot-on-sight order as claimed by a national daily yesterday.

'I am always in the picture of any interaction with any journalist by my boss. I am saying authoritatively that my boss did not give such directive. It is very embarrassing to him and the STF,' he stated.

Also, the spokesman of the Council of Ulamah in Plateau State, Alhaji Muhammad Sani Mudi, has condemned the group that claimed responsibility for the bomb explosions in Jos, describing it as irresponsible. He called on government to get to the root of the matter and get all those responsible.