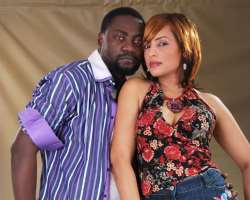 For beautiful actress, Lilian Bach there is no better way to end the year than to set out plan to start the new one in a big way.

The actress who has been busy crisscrossing the world since the beginning of 2010 and putting finishing touches to her movie project has concluded plans to release her latest movie, Eletan (Deceiver) in cinema in 2011.

Eletan is the story of a woman who thinks she can have her cake and eat it. The more she schemes, the more she's caught in her webs of lies. When the center could no longer hold, she decides to play her joker and that changes calculation of things for her and victims of her game.

The Yoruba movie which will be released in cinema in first quarter of 2011 has stellar cast such as, Yemi Blaq, Bolaji Amusan (Mr. Latin), Kareem Adepoju (Baba Wande), Muyiwa Adegoke, Ireti Osayemi, Ayo Badmus and many others.

Lilian who is predominantly an English-speaking actress said the reason behind producing a Yoruba movie is to further show her versatility. 'Yes, I am more of an English-speaking actress but don't forget that I've done a couple of Yoruba movie too. Art has no language barrier; entertainment just like music is defined as a universal language. I am an actress and now a producer; language should not be a barrier, adaptability is an actor's stock in trade'.

Bakky Adeoye, the production manager of the movie said Eletan is the best movie project he has been involved in 2010 while Mr. Latin who is known to have done over 100 movies in his lifetime said he has never acted the kind of character he pulled off in Eletan, 'this is my best movie ever' he said.