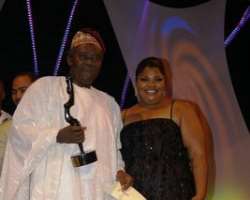 Can the Africa Movie Academy Awards (AMAA) open up to the rest of Africa and not look too Nigerian?

I have always had a problem accepting the AMAA to be a truly African award scheme due to its overabundant Nigerian influence. A lot has changed since the inception of the awards including a change in the size and design of the award trophy but one thing that hasn't changed from day one to date is the undeniable fact that most of the nominees and eventual winners are Nigerian. As the countdown to the 2008 edition heats up, Nigerian actors and movies AGAIN seem more favoured to win the major categories.

According to a recent press release, top contenders for the Best Actor nod include Nkem Owoh (Stronger than Pain); St. Obi (Check Point); Kenneth Okonkwo (African Soldier); Kanayo .O. Kanayo (Across the Niger) and O.C Ukeje (White Water). The rest are Van Vicker (Return of Beyoncé) and Kofi Buknor (Run Baby Run). Those gunning for the Best Actress are Stella Damasus Aboderin (Widow); Kate Henshaw-Nuttal (Stronger than Pain/Rivals); Dakore Egbosan (Caught in the Middle); Genevieve Nnaji (30 Days/Keep My Will); Rakiya Atta(Across the Niger) and Jackie Appiah (Princess Tyra). So where are the actors from Kenya, Uganda, Zambia or South Africa?

I am sure you get the drift and direction of the awards. Most of the non-Nigerian nominations seem to be from Ghana. Quite frankly I don't think the awards qualify to be even called a West African Movie Academy Awards let only the grand African awards it purports to be. Here is some further proof:

Chiwetalu Agwu - (Across the Niger)

Ireti Doyle - (Across the Niger)

Uche Jumbo - (Keep My Will)