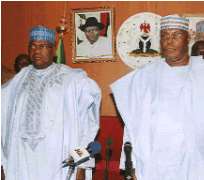 •Atiku and Goje rise to the National Anthem
'In fact, I thought it was the president of Nigeria that was visiting Gombe State.'  Usman Mohammed, a commercial motorcyclist popularly called Achaba in the North, was expressing his opinion on Atiku's recent campaign visit to Gombe State.

The traffic was unusually busy as motorcycles, buses and smaller vehicles carrying Atiku's campaign posters stormed the city on Monday, December 7, 2010. The Peoples Democratic Party's (PDP) presidential aspirant's campaign train was in the city to woo party faithful ahead the primaries.

Expectedly, mixed reactions trailed the visit as Daily Sun x-rayed the thoughts of some residents of Gombe who were seen in groups, as they debated the visit.

'Atiku has lots of money and some people are only there to collect their share. When the Jonathan campaign people came, they were also there,' one resident said in Hausa.

'Atiku will open the tank of money during this campaign period. I know Atiku, he is very generous and his presence attracts people because they know they will benefit,' another resident concurred.

This group expressed reservations over the ability and capacity of Atiku to deliver the country from its tattered state.

However, some argued that General Muhammadu Buhari was the best choice for the north and Nigeria. 'If Nigeria will become a better country, we need somebody like Buhari who is very transparent. But the corrupt politicians won't allow him to rule this country,' a resident said.

Atiku's campaign train was received by Governor Danjuma Goje. His supporters waited patiently outside the gate of the Government House, Gombe, chanting 'Sai Turaki.' Atiku, the Turakin Adamawa is seen as the political mentor of Goje, who holds the traditional title of Sarkin Yakin Gombe and played a key role in Goje's emergence in 2003, displacing Abubakar Hashidu of ANPP. An indication of close relationship between the two was never lost on the public.

As if to buttress this, few years ago, Atiku was in Gombe to give out two daughters of Goje in marriage. Few months after, the relationship between Goje and Atiku snapped and the two politicians were alleged to have gone their separate ways. The disagreement was alleged to have been a fall-out of the problem between former president Olusegun Obasanjo and Atiku. 'Many governors wanted to save their political careers so they became openly sympathetic to the ex-president,' a source who did not want his name to be mentioned said.

But this eime around, there was nothing to give the impression that the two men were still political foes. 'My coming to Gombe State is like home coming,' Atiku, who began to unravel his mission to Gombe said. 'Goje is undoubtedly my younger brother. The visit has been in the pipeline. We have been discussing it. There is no much difference between Gombe Sate and Adamawa State. We consider ourselves as brothers because we not just share boundary, but the two states and the people have a lot of things in common.

'All four camps have been integrated. Ken Nnmani was with IBB, Lame who was with Saraki, Senator Ben Obi who was in the Gusau camp and my camp, are all working together to ensure we achieve victory. All the four campaign organizations have been integrated from bottom to top and we are now moving as one. It will be a tragedy if the ticket is not taken by the group. I will urge you all to support it. It is your property, it is your destiny.'

Goje was full of encomiums for the PDP presidential aspirant for beating the heavyweights: 'It is not a small feat because after he left the PDP, some of us thought he would never come back. He came back even amidst controversies to be accepted in the PDP and in the end he emerged the PDP consensus aspirant for the North. It is a big achievement.'

Governor Goje said that it was disheartening that in spite of the fact that Gombe was one of the states which gave one of the highest votes in the country to the PDP in the last elections, no tangible project had been executed by the Federal Government in the state to reciprocate the gesture:

'Even though we gave more than one million votes to PDP in 2007, we did not get commensurate treatment from the PDP Federal Government and I stand to be corrected. You cannot just continue to promote states which did not vote for you, and then neglect those who have voted for you. This is very discouraging. I find it difficult to face the people and say vote for PDP again and they will tell me what of the last time we voted for PDP. In fact, it looks like it's better not to vote for PDP because with the opposition, you will get better treatment. Once more, I wish you a very successful electioneering here in Gombe State.'

He promised that the state would work tirelessly to ensure that the PDP   maintain its hold on the state in the 2011 general elections. He called on whoever would emerge to remember to pay back the people of the state for their unrelenting support to the party.

Speaking, Atiku said he was in the state to solicit for the support of the people of the state especially the PDP members: 'I am going to meet with the traditional rulers and all PDP stakeholders to discuss.'