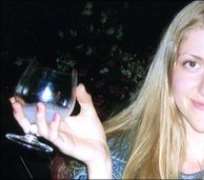 Miss Zatuliveter had vowed to fight any deportation case

A parliamentary aide arrested over claims she is a Russian spy has told the BBC she has been released on bail.

Katia Zatuliveter, 25, who worked for Lib Dem MP for Portsmouth South, Mike Hancock, had been arrested on 2 December, reportedly on MI5 orders.

Her presence was alleged to be not “conducive to national security”.

In an e-mail sent to the BBC from the immigration centre where she was being held, Miss Zatuliveter had vowed to fight any deportation case.

“I am in the process of appealing against the deportation and absolutely sure I will win it (if there is justice),” she wrote.

A spokesman for the UK Border Agency, which made the arrest, said he could not reveal what would be the next stage in the case.

“We do not comment on individual cases where there's ongoing court proceedings,” he said.

Ms Zatuliveter, who had been working for Mr Hancock since 2008, had been interviewed by officials four or five times since the summer.

The MP has said he had “no reason to believe she did anything but act honourably during the time she was working for me” and she was “determined to fight her corner”.

Mr Hancock sits on the House of Commons Defence Select Committee but said Miss Zatuliveter had not been involved in any sensitive work.