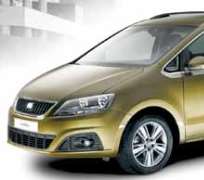 Seat Alhambra
SEAT Alhambra is a large seven-seat MPV produced by the Volkswagen Group. It derived its name from the Alhambra of Granada, one of the most famous monuments in Spain.

Like its Volkswagen Sharan MPV stable mate, the 2011 SEAT Alhambra is all-new and it replaces the previous generation, which was on sale for 15 years.

Both the Alhambra and Sharan are built on the same production lines in Portugal.

Re-engineered from the ground up, the all-new Alhambra combines a high degree of usability with sporting character in true Seat fashion.

Its sophisticated running gear and extensive hi-tech equipment come together with a choice of four engines that combine powerful performance with outstanding efficiency.

Experts say the new Alhambra is an ideal partner for active and sporty families. Its roomy MPV offers plenty of space for leisure, business and hobbies, fulfilling the expectations of family life, as well as the demands of high-mileage business drivers.

The Chairman, Seat, S.A. James Muir, says, 'Innovation and intelligence are the key words for our new Alhambra. This is a huge step forward in terms of usability as well as in dynamics and safety. 'Its outstanding concept combines the highest levels of functionality and state-of-the-art technology with an excellent standard of quality and workmanship. And, of course, it wouldn't be a Seat if it didn't also represent incredible value for money.'

Features
The new generation Alhambra has the perfect format for a versatile MPV. At 4.85 metres, it is now 22 centimetres longer than its predecessor. It has also gained an additional nine centimetres in width, taking it to 1.90 metres. These dimensions deliver an exceptionally generous amount of room, with ample space in the third row even for two adults.

The long sliding doors, which are also available with electric operation in the style equipment line, offer easy access to all seats. The luggage compartment is also more than generous – measuring a full 2,430 litres, almost 2.5 cubic metres, when the second row of seats is folded in the five-seat version.

The floor of the luggage compartment is completely flat, even with the seats folded. When the third row seats are folded, the flat loading surface is 1.3 metres long and is finished with high quality carpeting.

With five seats in place, load capacity up to the parcel shelf is 809 litres, or 1,339 litres up to the ceiling when the optional mesh net is in place. The boot space increases to 2,430 litres when the third and second row seats are folded.

The perfect complement to the generous load capacity on the new Seat Alhambra is the redesigned hatch. To make cargo operations even easier, an electrically operated hatch is available with the style trim package.

Design
It has an arrow-shaped bonnet, eye-catching grille and a pronounced front skirt also sporting the arrow design.

Its large MPV sends a clear signal that it is part of the Seat family. A beefy roof spoiler, the downward sweep of the hatch and large light clusters dominate the rear of the vehicle.

Beneath its attractive exterior, the Alhambra is an all-new vehicle developed from the ground up and packed with the latest technology. It starts with the engine line-up – the two pairs of TSI and TDI power plants are direct injection turbocharged units.

The two TSIs generate 150 and 200 hp, while the TDIs deliver 140 and 170 hp to the front wheels. All four engines supply the Alhambra with a powerful and refined drive.

The new Alhambra features two systems that greatly enhance its efficiency – the auto stop/start system and the energy recovery function, which are included as standard equipment with all engine variants except the 200 hp 2.0 TDI.

With an average fuel consumption of 5.5 litres per 100 km and CO2 emissions of only 143 g/km, the Alhambra equipped with the 140 hp 2.0 TDI delivers the best performance in its segment.

The manufacturer says that both TDI units feature a selective catalytic reduction SCR catalytic converter, making them among the cleanest diesel engines in the world.

The new Alhambra is equipped with a manual six-speed gearbox, or an optional dual clutch automatic (standard on the 2.0 TSI). Just like the engines, this high-tech DSG delivers the perfect combination of sporty performance, comfort and efficiency.

A wide range of innovative technologies available in the new Alhambra – some as optional extras, include bi-xenon headlamps and automatic high beam disconnection.

The park steer assistant helps the Alhambra's driver to steer into even relatively tight spaces – both parallel and perpendicular to the road; the three-zone climatronic guarantees comfortable cabin temperatures.