WIKILEAKS: AUSTRALIA FM SAYS US TO BLAME, NOT ASSANGE 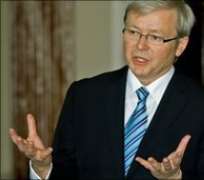 Australia's foreign minister has said the US is to blame for the release of thousands of diplomatic cables on Wikileaks, not its Australian founder, Julian Assange.

Kevin Rudd said the release raised questions about US security.

Mr Rudd said he did not “give a damn” about criticism of him in the cables.

Mr Assange, arrested in the UK over sex crime allegations in Sweden, has accused the Australian government of “disgraceful pandering” to the US.

Over the past two weeks, Wikileaks has released thousands of classified messages from US envoys around the world, from more than 250,000 it has been given.

Washington has called their publication “irresponsible” and an “attack on the international community”.

'First class job'
In an interview with Reuters news agency, Mr Rudd said: “Mr Assange is not himself responsible for the unauthorised release of 250,000 documents from the US diplomatic communications network. The Americans are responsible for that.”

The Australian government has found itself in the anomalous position of offering consular assistance to Julian Assange after his arrest in London, while at the same time being highly critical of his part in leaking sensitive US diplomatic cables.

Julian Assange has written an opinion piece for The Australian newspaper which is scathing in its criticism of the Gillard government, accusing her of “trying to shoot the messenger”.

The case of Julian Assange is already drawing comparisons here with the detention of an Australian, David Hicks, at Guantanamo Bay. Hicks, who trained with al-Qaeda in Afghanistan, was found guilty of providing material support for terrorism by an American military tribunal. But he became something of a folk hero for many Australians, because of the widespread feeling that he was treated unfairly by the Americans after being detained at Guantanamo Bay without trial.

Mr Rudd, the former prime minister who was replaced by Julia Gillard in June, added: “I think there are real questions to be asked about the adequacy of [the US] security systems and the level of access that people have had to that material.

“The core responsibility, and therefore legal liability, goes to those individuals responsible for that initial unauthorised release.”

Mr Rudd was dismissed in one leaked US cable as a “mistake-prone control freak”.

In cables published by the Sydney Morning Herald former US ambassador Robert McCallum said Mr Rudd made “snap announcements without consulting other countries or within the Australian government”.

The US was also angered at what it called Mr Rudd's “self-serving and inaccurate leaking” of a phone call with then US President George W Bush in which Mr Rudd was reported as saying: “Stunned to hear Bush say, 'What's the G20?'”

Russia is a “virtual mafia state” with widespread corruption and bribery

Afghan President Hamid Karzai is “paranoid and weak”. Extent of corruption in Afghanistan

UK fears over Lockerbie bomber
Wikileaks cables: Key issues
What does Wikileaks list tell us?
“My job's just to act in Australia's national interest as Australia's foreign minister. I don't, frankly, give a damn about this sort of thing. You just get on with it.”

Mr Assange has been highly critical of the Australian government's stance on the release of the cables.

In an opinion piece in The Australian on Wednesday, Mr Assange accused the Australian government of “disgraceful pandering” to the Americans and of putting the powers of the government fully at the disposal of the US.

In the piece headlined “Don't shoot the messenger for revealing uncomfortable truths”, he says: “Democratic societies need a strong media and Wikileaks is part of that media. The media helps keep government honest.”

He adds: “The Australian attorney-general is doing everything he can to help a US investigation clearly directed at framing Australian citizens and shipping them to the US.”

Mr Assange has been refused bail by a court in London but has vowed to fight extradition to Sweden.

He denies sexually assaulting two women in Sweden but was remanded in custody pending a hearing next week.