IBB Writes PDP, Threatens To Pull Out Of Party Over Zoning 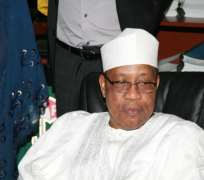 ABUJA, Dec 07, (THEWILL) - A former Presidential aspirant of the Peoples Democratic Party, PDP, who lost out under the consensus arrangement of the Adamu Ciroma led Northern Political Leaders Forum (NPLF), General Ibrahim Badamasi Babangida has written to the national leadership of the ruling Peoples Democratic Party (PDP) warning that he alongside many will pull out of the party if President Goodluck Jonathan is not stopped by the party from contesting next year's presidential election. In a letter titled: ‘Peoples Democratic Party and the Challenges of the Judgement of the High Court of the Federal Capital Territory in Suit No. FCT/HC/CV/2425/2010 - Sani Aminu Dutsinma V. Peoples Democratic Party- Re Rotation and Zoning of Party and Public Elective Offices’, and addressed to the National Chairman of the PDP, Dr. Okwesilieze Nwodo today, the former Presidential aspirant said it is the duty of the party to comply with the judgment. Babangida wrote in the letter that: “As you are well aware, some controversies have, for sometime now, arisen over the decision to jettison the principle of zoning as enshrined in the constitution of the Party. It is my view, and that, I believe, is the view of many public spirited, patriotic and responsible members of our Party that to do so would violate the provisions of section 7.2(c) of the constitution of the Peoples Democratic Party, which provides as follows:

“In pursuance of the principles of equity, justice and fairness, the party shall adhere to the policy of rotation and zoning of party and public elective offices and it shall be enforced by the appropriate executive committee at all levels. “The above section is amplified by Paragraph 2(c) of the preamble to the said constitution which provides that: To create socio-political conditions conducive to natural peace and unity by ensuring fair and equitable distribution of resources and opportunities, to conform with the principles of power shift and power sharing by rotating key political offices amongst the diverse people of our country and devolving powers equitably between the federal, state and local governments in the spirit of federation. “In Suit No. FCT/HC/CV/2425/2010 (Sani Aminu Dutsinma V. Peoples Democratic Party and 1 Or), the above provisions of the Party’s constitution relating to rotation and zoning of Party and public elective offices came up for interpretation before His Lordship Hon Justice L. H. Gummi, OFR, Chief Judge of the High Court of the Federal Capital Territory. In his judgement delivered on the 1st day of December, 2010, the learned Chief Judge held that: “... PDP as a party has since conceived and agreed to the principle that the party shall zone key offices between the various groups of political interest. I do not think that the provisions of Art. 7.2(c) are capable of any other interpretation. That provision is clear and unambiguous and it would be unwise to attribute any other meaning to it other than what the framers of the constitution sought to achieve in the interests of equity and justice and to reflect the adverse nature of the Nigerian society.

(1) “The provision of Article 7.2(c) of the 1st Defendant’s constitution 2009 as amended recognises the principle of zoning and rotation of party and public elective offices. The said article is subsisting and binding on the party, its organs and members... “As a founding member of the Party and in fact as one of its principal officers at the time, and as its present chairman, no one is in a better position than yourself to understand and to execute the Party’s constitution.” IBB reminded Nwodo that: “It was not too long ago that you were elected, almost unanimously, as Chairman of our Party. It was a time of crises when there were agitations for reform. You were elected precisely because we were all convinced that you had both the wisdom and the courage to restore the Party to the path of truth and justice. Under your leadership, this issue of zoning and rotation of offices was discussed by the National Executive Committee of the Party and the Committee came to the conclusion that rotation and zoning of party and public elective offices is a policy of our party – a policy enshrined in the constitution of the Party. Having come to that conclusion it was the duty of the Committee to enforce it. The duty of the committee in that regard was made clear by the learned Chief Judge when he declared:

“It is domestic issue and not such as would be justifiable in a court of law. The power to nominate and sponsor candidates to an election is vested in a political party and the exercise of this right is the domestic affair of the party.” Babangida said: “The Judiciary has made its pronouncement. Our duty is to comply. That is the appeal which I now make to you – to comply with the provisions of the constitution of the Party as interpreted by a court of competent jurisdiction.

“If, in the past, the National Executive Committee had any doubts as to the meaning of the provisions of the relevant sections of the constitution relating to these matters, such doubts have now been resolved by the judgment of the High Court of the Federal Capital Territory in the suit above-mentioned. It is clear from the said judgment that the provisions of the constitution are so clear as not to require the assistance of judicial interpretation in order to understand them. This is what the Hon. Chief Judge said:

“It simply means that they reject and are therefore not prepared to conform to the principles of power shift and power sharing by rotating key political offices amongst the diverse peoples of our country and devolving powers equitably between the Federal, State and Local Governments in the spirit of federation. “If the Party has become so helpless in the face of these gross violations of its own constitution by its officers and its highest elected representative, then many of us shall have no alternative but to reconsider our continued membership of the Party. “Let me reiterate that if members of the party, are at liberty to violate the provisions of its constitution and if such violations of the constitution may be tolerated by the Party, then, there is no difference between a party with a constitution and a party without one. The powers of the Party are defined, and limited. And so are the powers of its members. The constitution of the party is written in order to ensure that the limits set to those powers are not forgotten or exceeded.

“The whole essence of having a written constitution or of defining the rights and obligations of the members of the party is defeated if the restraints imposed by the constitution may be violated at will by its members without consequence. I commend to you the words of Chief Justice Marshall of the United States who said:

“The distinction, between a government with limited and unlimited powers, is abolished, if those limits do not confine the persons on whom they are imposed, and if acts prohibited and acts allowed, are of equal obligation.

“The constitution of the party is its fundamental and paramount law and all actions of members of the party which are inconsistent with its provisions or repugnant to it are void,” the former military dictator wrote.