THE BATTLE OF TWO GENERALS 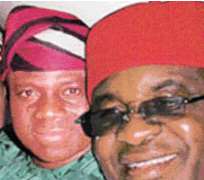 Onoja and Mark
'Never go backward. Attempt, and do it again with all your might. Determination is power.' These words may probably have been on the lips of Major-Gen. Lawrance Onoja (rtd) when he declared his intention to represent Benue-South Senatorial District in the 2011 general elections. The ex-Kastina State administrator would be confronting the current President of the Senate, David Alechenu Bonaventure Mark in yet another political battle for the third time.

Since the court's verdict denied Usman Abubakar (Young Alhaji) entry into the National Assembly in 2007, the floor is now open for these two political warlords to determine who represents the zone come 2011.

For the ex-Plateau State military administrator, Onoja believes that it's time for transition of power noting that the incumbent occupant of the seat has spent over a decade on the seat.

But Senator David Mark who was conferred with the chieftaincy title of Okpokpowulu K'Idoma (the highest title in the land) thinks otherwise. The promise of the creation of Apa State he made during his campaign has not been realized, and this has set many tongues wagging.

Onoja during his declaration stressed that 'I know I am challenging the Senate President. He is my brother, and I respect him. I believe that having spent 12 years on the seat, the Idoma people are determined to make sure that they try another son or daughter.'

He further maintained that 'In a democracy, everybody is free to contest for any position. The decision as to who should represent the district is for the Idoma people, not mine. At the end of the contest, whoever wins, we will continue to explore ways of ensuring that our people reap the dividends of democracy.'

He upped the Arite thus: 'If you think you can test an infantry General then you are deceiving your self.'

He argued that 11 years of the Senator in the Senate, was not enough to end the plight of Idoma people in the area of bad roads, youth unemployment, cultism and neither could the promise of Apa State realized. But if given the opportunity, he promised to bring Apa to their corridors. 'We will also work towards ensuring that the Idoma people get three additional local governments,'' he pleaded.

But, many Idoma have continued to support Mark. One of them is the immediate past chairman of Okpokwu Local Government and Association of Local Governments of Nigeria (ALGON) Benue State chapter, Mr. Abbah Moroh who is pioneering his campaign team. According to the former gubernatorial aspirant on the platform of the Peoples Democratic Party (PDP) in 2007, he was approached to work for the All Nigeria Peoples Party (ANPP) senatorial candidate, but he refused, based on principle.

'As his Campaign Co-ordinator in the state, how was I to explain to the late President Yar'Adua that I couldn't deliver my senatorial district to the party when other zones delivered? Now, I have been vindicated that Senator Mark won both at the polling booth and at the tribunal. He is also performing excellently well at the senate where he holds forte.'

Moro who is also the Chairman, Governing Council of the University of Agriculture, Makurdi expresses joy that he has been vindicated in the end by the sterling performance of Mark at the National Assembly since he came on board as Senate President. 'The man who supported us to go and get Apa State is our brother and our friend. We are reaching the end of the road soon, and Apa State will be created.'

Another renowned Idoma indigene who believes in Mark as the antidote to their problems, Mr Alex Ineke, chairman of Idoma Peoples Congress (ICP). Recently in a press statement, affirmed that Onoja is only exercising his democratic and constitutional rights to contest, but 'At this stage of our collective struggle for the actualisation of Apa State, even a blind Idoma man knows that an Onoja in the Senate now cannot be the solution to it.

And that's why the Idoma nation has resolved to speak with one voice for Mark to finish this assignment his constituency gave him. Onoja can wait for his own time. Besides, assuming Mark is disinterested in the 2011 contest, the seat of the senatorial zone by a consensus of the Idoma nation, would move to another political geo-political axis of the zone, but certainly not Ohimini where Onoja hails from, because it shares the same political affinity with Otukpo.'

But Group Captain S. J. Audu (rtd) told a group of journalists in Abuja recently that the 2007 election was inconclusive, 'Let me quickly correct the impression that Gen. Onoja was defeated in 2007. No, he was not.  He was only denied his eminent senatorial victory.'

The entry of Onoja into the senatorial race has continued to spurn the 'war of words' between these two kinsmen, hence Onoja and his team are tired of hearing the promise of the creation of Apa State ad infinitum. He is striving hard to reclaim a mandate from what he tagged 'hapless delegates.'

But the report on the official website of the senate president states that Senator Mark has established a radio station (Joy FM 96.5) which offers employment to over 40 youths in the area. He also initiated an inter-secondary school quiz for secondary schools in Benue-South Senatorial District where the winners get the David Mark Scholarship Scheme (DMSS) and mouth-watering prizes. There is also the free traders' loan scheme to assist market women, and the soap making factory and tailoring institute he established.

Onoja while reacting, recalled that in the past, he had assisted many Idoma people to be recruited into the Nigerian Prison Service, Nigerian Army, Nigerian Navy and other security outfits. As the day beckons, providence would determine whether Onoja would break the jinx of 11 years or Senator Mark will ride on in order to actualize Apa State.