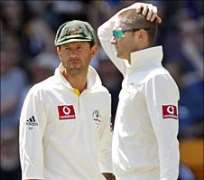 Clarke (right) worked with captain Ponting (left) in the nets

Australia vice-captain Michael Clarke says he is fit to play in Friday's second Test against England in Adelaide after recovering from a back injury.

But pace bowler Mitchell Johnson is widely expected to be dropped to make way for Doug Bollinger after a poor performance in the drawn first Test.

England are set to stick with the same line-up from Brisbane.

Coach Andy Flower will also be able to play a full role after missing part of the first Test to have cancer surgery.

Australia's Clarke had an extended nets session on Wednesday to prove his fitness and also worked with captain Ricky Ponting in an effort to regain his form after a disappointing score of only nine runs.

“I was getting him [Ponting] to throw me a few balls and get him to have a look and see what his thoughts were,” said Clarke afterwards.

“He was just mentioning that I was a bit low in my stance, so I just tried to stand a little bit taller and see if it worked.

“I felt a little bit better. If you saw my net session I struggled at the start there and felt like it got better throughout a pretty long net session so that was good.”

Australian media reports suggest that pace bowler Johnson refused to take part in the nets session after being told he was being dropped to make way for Bollinger.

Johnson has played in 39 Tests but his figures of 0-170 at Brisbane marked the first time he has failed to take a wicket in a Test.

The home side's only other selection worry is Ben Hilfenhaus, who has been suffering with a sore hamstring.

If he fails to recover in time his place could go to Ryan Harris, who is on the comeback trail after knee surgery.