Atiku's Waiver Will be Reviewed - Akpabio 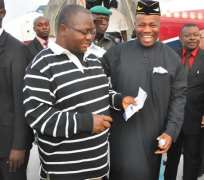 Akpabio said Atiku would be screened by a panel since the party was yet to certify that the waiver granted the former Vice President followed due process.

Atiku Abubakar who initially dumped the PDP for the Action Congress of Nigeria (ACN) in order to actualize his presidential ambition in the 2007 Presidential election following disagreements with former President Olusegun Obasanjo, returned to the party last year and was given a waiver to contest the PDP presidential primaries after President Goodluck Jonathan intervened but not without protests from some party men especially Adamawa State PDP, Atiku’s home state.

Governor Akpabio during a chat with journalists in Abuja over the weekend said Atiku would have to convince the screening panel that he truly belongs to the PDP fold because the photographs which appeared in Newspaper advertisements congratulating him after his selection as the NPLF consensus candidate showed him holding a broom (an ACN symbol), which according to Akpabio puts the waiver to question.

“If you notice immediately after the announcement of the consensus candidate, the picture that was shown was a picture with a broom, sweeping and then showing previous campaigns of AC presidential candidate. For us we were shocked, if we were jubilating with broom and picture of broom that shows clearly that we are talking about two different parties, one AC and one PDP.

“The outcome of the consensus was a tonic that has brightened the chances of Goodluck/Sambo success in 2011. I do know that in politics you cannot underrate anybody but one thing is certain that President Goodluck Jonathan and Namadi Sambo are both grounded in PDP and the consensus candidate just thrown up will clearly find it difficult to find his feet,” Akpabio added.

The Akwa Ibom State Governor said the Jonathan/Sambo would continue to ensure Nigeria’s unity and integration of all sections of the country.

“We still see the candidature of President Jonathan/Sambo as the unity ticket that will bring unity to the whole country and would really give a sense of belonging to all sections of the country because it will lead to total integration of the country. Yes, you have a South-South man coming out for president that has been accepted by all and sundry and then you have somebody from the core North also as his vice. Both of them are former governors with experience of what the grassroots really wanted in Nigeria,” Akpabio said.