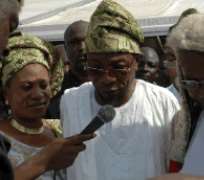 The new governor of Osun State, Engr Rauf Aregbesola, started on a tough note yesterday as he ordered the immediate freezing of public accounts at all levels in the state. He also asked the state's Accountant General to present details of the state's account till Friday, November 26 to his office immediately.

His deputy, Mrs Grace Titilayo Laoye-Tomori, was the first to be sworn in at the event, which started more than two hours behind schedule. The new governor arrived the venue accompanied by former Lagos State Governor, Asiwaju Bola Ahmed Tinubu, about 2.20 pm in an helicopter.

Aregbesola in his inauguration speech delivered shortly after he was sworn in by the Chief Judge of the state, Justice George Olaniyi Ojo, in Osogbo, said his decision to freeze the state account was not to punish anybody but to get the record of the financial situation of the state straight.

The governor, who was sworn in exactly 3.00pm at the premises of the Government Technical College, Osogbo, amid jubilation by a large crowd, said he wanted to have a clear and unambiguous financial position of the state at all levels. A visibly elated Aregbesola, who was full of praises to God, attributed his victory at the Court of Appeal, Ibadan, to God and dedicated same to the people of the state, especially those who lost their lives during the election and the struggle to reclaim his mandate.

The new governor, who solicited the support and co-operation of people of the state, said: 'Osun must develop. I am committed to developing the state but I cannot do it alone. I need every one of you to achieve my dream for our dear state. 'Let everybody come around and give meaningful and useful advice for the government for the development of the state.

This is your government and not my government. Osun has now become a true democratic state where the voice of the people will count. Let me assure you that you will all serve in this government since we cannot do it all alone.' Going down memory lane, Aregbesola who sang four different praise songs during the ceremony, described his journey to victory as one that was not smooth, considering the hurdles he passed before achieving his goal.

According to him, 'those who steal power for selfish interest should realise that it is temporary. Only the power that comes from God and from the people is permanent and everlasting.' He said he was in Osun to rekindle and restore its lost hope as a result of the misrule and misgovernance of the seven and a half years of former Governor Olagunsoye Oyinlola of the Peoples Democratic Party (PDP) government.

He assured the people that his government would restore dignity to governance and contribute to the well being of every individual in the state. While lauding the judiciary for its independence and courageous way of dispensing justice, Aregbesola said: 'Nigeria now has a judiciary made up of men and women of courage and principle who money could not buy.'