KALIKA OFF TO BRAZIL, CANADA FOR EAGLES 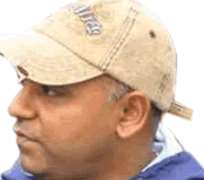 Kalika expected in Nigeria on November 30, had visited Brazil to keep abreast on modern techniques of the game before travelling to Canada for another storming exercise before cutting his trip short, owing to the proposed unveiling of his friend next month.

“We know there is a big challenge to prepare a formidable team for Nigeria. We need to always be on our toes to present the best team for the country. We need to borrow ideas from different continents and get the best result. We can only be happy if the national team is winning,”he said.

The Dutch coach, who was in Nigeria recently when Nigeria Football Federation (NFF) announced Siasia as Eagles' coach, had said the work must start in earnest, to achieve the team's long term goals. The Eagles' new technical crew is saddled with the responsibility to qualify the team for the 2012 Africa Nations Cup and also play in the semi-final of the 2014 World Cup in Brazil.”

“This may look like a tall order or ambition, but it is achievable. Everything is a matter of good and long planning. We need to start the job now and work on the likely players who can give us the result as well as make discoveries too. “There are talents in the Nigerian local league but we only need time to work on them to become some of the best players around.”