MySpace deal looks to Facebook to gain and retain users 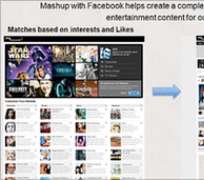 The once dominant MySpace has turned to the company that stole its crown, Facebook for help to drive users to its ailing site.

This means users can port over their likes and interests listed on Facebook.

In turn users will get a stream of entertainment content based on these preferences.

"We feel this is a complimentary service to Facebook," said Mike Jones, MySpace chief executive officer.

"This new feature is a great illustration of our strategy around social entertainment and enabling the real-time stream."

MySpace is among more than a million websites letting Facebook members extend their social graph on the world's biggest social network to other parts of the web.

Facebook's vice president of partnerships Dan Rose said the sharing of information is a strategy that "makes a lot of sense."

"Sharing entertainment and music interests is part of many of our friendships, online and off.

"MySpace is giving people an easy way to bring their favourite bands, celebrities and movies from Facebook to create a personalised experience on MySpace from the start," added Mr Rose.

Wins and loses
Is this partnership an illustration that MySpace has conceded supremacy to Facebook?

Industry analyst Augie Ray of Forrester Research told BBC News there were gains for both companies with this deal.

"People have come to think of MySpace in a certain way and while I don't think this deal will help them attract a lot of users it is necessary that those people on the site enjoy the MySpace experience and I think this helps.

"This is also a good opportunity for Facebook to demonstrate that the information you have about yourself and about your friends belongs to you. In many respects this is about Facebook changing attitudes over ownership of data than anything else."

"It's official acknowledgement on the part of MySpace that Facebook has indeed become top dog in the social networking space, and its better to be with them than against them at this point."

MySpace which is owned by Rupert Murdoch's News Corp has an estimated 130 million users while Facebook has over 500 million.

Facebook's demise ?
And what of Facebook's future?
According to one internet expert, the world's biggest social network only has five years left before it starts to see users drift off the way they did with MySpace and other social site Bebo.

At a marketing conference in Sydney, Australia this week, Dr Jeffrey Cole claimed that Facebook will not fare any better at holding onto its audience than these sites have in recent years. Appearing at the same Ninemsn Digital Marketing Summit four years earlier, Dr Cole predicted the demise of MySpace.

"The same thing will happen to Facebook but it's going to take a lot longer," said Dr Cole a director of the World Internet project which tracks how the internet affects media consumption.

"And it's not going to be replaced by one big social networking community but it's going to fragment."