Why I Want A Second Term â€“ Jang 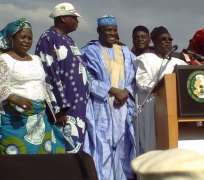 JOS, Nov 11, (THEWILL) - Governor Jonah Jang of Plateau State today kick started his campaign for a second term as Governor saying he intends to continue to better the lot of the state.

Jang said he is yet to achieve his target in terms of development for the state and promised to increase the tempo if given the mandate for the second term adding that the frequent religious and ethnic crises in the state took a toll on its finances which eventually affected his developmental plan for the state.

The governor was speaking while he addressed a huge crowd in Mangu Local Government Area of the state, venue of his formal declaration to contest for the governorship seat in the 2011 general elections.

On politics at the national level, Jang declared that Plateau State remains an integral part of the North saying that no state in the North can claim to be more of North than Plateau State.

“Plateau did not share boarder with Cameroon or Chad, we are in the middle of the North and can claim to be more of Northerner than any other part of the North,therefore we deserve to be given equal treatment.”

He said Nigeria has develop beyond sectional interest urging citizens to be more nationalistic in their approach towards salient national issues adding that the stereotype that it should be North or South should be discarded with, if Nigeria is to forge ahead and develop as expected.

“We should stop thinking of North or South in our approach towards national issues. The present leaders should not be the ones that would divide the country.”

The Chairman of the occasion, Professor Jerry Gana implored the people of the state bury their differences and work towards achieving lasting peace in the state adding that Plateau like any other state needs peace to forge ahead.