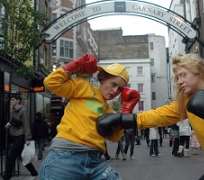 Women fighting in the heart of London would normally be cause for concern but today (thurs) two professional women boxers battled it out on Carnaby Street, Soho, to raise awareness of the new Olympic sport.

Women's boxing will have a place in the Olympics for the first time when London hosts the games in 2012. Both Marianne 'Golden Girl' Marston and sparring partner Angel McKenzie believe it's an exciting time for women's boxing.

The two boxers were joined by dozens of citizen reporters from Winkball.com, there to video people's opinions about a sport which still holds a certain taboo with the British Public.

As well as taking its place in the Olympics, woman's amateur boxing will be aired for the first time in the UK next weekend live from the GB Amateur Championships in Liverpool.

Speaking to reporters from Winkball.com, the UK's number one video messaging website, Marianne said: 'It's a great time for women's boxing and about time women boxers got the recognition they deserve.

“For the whole of human evolution people have been saying that women shouldn't fight or shouldn't box. But we're athletes and entertainers, and a lot of women have worked hard for this recognition.”

Marianne, 36, from Bermondsey, is one of the UK's few female professional boxers. Her next bout is against Lana Cooper on Saturday December 4th at York Hall in Bethnal Green.

Asked if she worries about being hurt in the ring, she said, “In the ring I don't really feel any pain. The pain comes in the training sessions. But maybe you should ask my sparring partner.”

“I started to box for fun about 10 years ago and it helped me give up drugs. Women's boxing is different from men's. We can't hit as hard and there are less knockouts. We box more like cats – we're more graceful.”

Asked if she thought it was time for women's boxing to take its place in the Olympics, she said: “Come on, it's the 21st century. Women should be able to show what they can do because boxing is an art. We entertain.

Sure it can be scary getting in the ring. You feel it in your guts, but we're there to entertain and the Olympics will greatly help the sport. People like something new.”

But Marianne also worries about her teeth. “Luckily my dentist is my best friend”, she said.