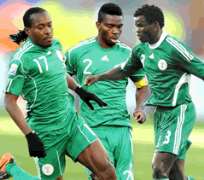 Ahead of the November 4 interview for the Super Eagles' top job, Samson Siasia insists that his rich credentials with age grade teams in Nigeria are good enough to give him the job. Speaking with an Abuja based radio station, Kiss fm, Siasia said that he had worked his way up the ladder and that it was time for him to take charge of the Eagles that parade most of the players he handled at age grade level who have now graduating to the senior national team

He expressed confidence in his ability to rise to the challenges at the interview and get the job, adding that his knowledge of the Nigerian players and his commitment to improving the game will land him the job. He denied reports in the media that he does not have confidence in the constitution of the interview panel

'I don't know where that story credited to me that I doubted the credibility of the technical committee came from. I did not say that to anybody because I know that we have very credible personalities in that panel that will interview me and Keshi. I want the job because it is my time to take the Eagles to the next level and I know I am best suited for the job right now' he stated.