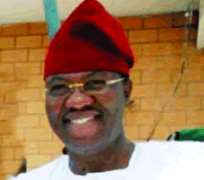 Chairman of the Northern Governors' Forum and Governor of Niger State, Dr. Muazu Babangida Aliyu said in Minna that the governors had slated for tomorrow, another meeting where a new chairman for the Forum would be picked. Incidentally, Daniel's kinsman and Osun State Governor, Prince Olagunsoye Oyinlola also claimed ignorance of Daniel's election, saying, he travelled out of the country when the agreement was reached.

Speaking through his Chief Press Secretary, Lasisi Olagunju, on Monday, Oyinlola said he had not taken a stand on the issue as he had just returned from the Biennial General Meeting of the International Golf Federation which held in Buenos Aires, Argentina. Earlier, Governors Adams Oshiomhole of Edo State and his Kano State counterpart, Ibrahim Shekarau had expressed their displeasure with Daniel's enthronement. Only last weekend, 17 governors met at the Ogun State Governor's lodge in Abuja, announced the appointment of the Ogun governor as successor to Kwara State Governor, Bukola Saraki.

The G.17 were among those who hitherto called on Saraki to relinquish the position having declared his intention to run for the presidency in next year's election. To them, Saraki's continued stay as chairman had the capacity to drag the association into partisan politics.

Declaring open the INEC Voter Education Interactive Session with Traditional Rulers in the North Central zone, Aliyu said even though the position was a honorary one, due process must be followed in choosing a successor to Saraki.

'No person can go outside the forum to elect a chairman' Aliyu said, in apparent reference to the election of Otunba Daniel.

The NGF, Aliyu argued, 'is a non partisan organisation,' adding that its membership cut across party lines. He alleged that some people wanted to hijack the Forum for selfish interest.

'Even if you hijack it you cannot use it for election purposes.'

Announcing the election of Daniel as replacement for Dr Saraki, Governor Suswan of Benue State said the decision was hinged on the exemplary performance of the governor and the good leadership he had given since he was elected.

Suswan said Daniel was 'unanimously elected by consensus of all the members of the forum' and had, therefore, been mandated to coordinate the activities of the group and respond to national issues as appropriate.

Governor Godswill Akpabio who was also at the unveiling of Daniel said his selection was based on his outstanding performance as an administrator.