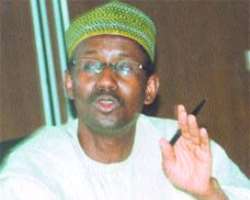 Mallam Ribadu
The stage is set for a battle of wits between former anti-graft czar, Mallam Nuhu Ribadu and former governor of Sokoto State, Alhaji Attahiru Bafarawa, who is set to contest the 2011 presidential election on the platform of Action Congress of Nigeria (ACN). According to Saturday Sun finding, the decision of Bafarawa, who was presidential aspirant of the Democratic Peoples Party (DPP) in 2007, to run on the ticket of the ACN followed the conclusion of a working agreement between his party and the ACN.

The move by the former governor has altered political calculations within the ACN, especially in Mallam Ribadu's camp, a development, which a chieftain of the party described as good, as it aids the party's efforts at spreading fast to every part of the country.

ACN is particularly happy about Bafarawa's interest, because of his political stature, seen as intimidating enough to clinch him the party's ticket. He was a local government chairman, two-time governor, one of the founders of PDP and a former presidential aspirant.

Bafarawa, who just returned to the country from London, is regarded by his followers as a grassroots mobiliser, as evident in his popularity and acceptance in Sokoto, where his party is believed to have won the state governorship election on the basis of his giant strides in the state, but was denied.

When contacted by Saturday Sun,  Bafarawa confirmed that there were pressures on him to run for the presidency but said he is consulting and would make his decision public soon.

He said: 'Yes, I am under pressure to run, but I am still consulting widely, Allah will direct us aright. The situation in Nigeria is such that men of good conscience cannot afford to fold their arms and watch the fortunes of the nation take a nose-dive.'

'I have had the opportunity to relate with people at the grassroots level, and I can tell you the problems they are facing. It is the appreciation of these that guided us to record the modest achievements as a governor. And up till now, it is those things that people can really say they have as democracy dividends.'

Commenting on the issue, National Secretary of ACN, Dr. Usman Bugaje, confirmed that  Bafarawa and the party were talking concerning 2011 and that the discussions have been ongoing.

According to him, 'this is democracy and that is its beauty. The other day, Mallam Nuhu Ribadu expressed his own intention. He was welcome. Bafarawa too is welcome. Everybody is free. Even if you too want to contest, we will welcome you. The party will et one candidate at the end of the day.'

Sources said the imminent entry of Bafarawa into ACN was already generating ecstasy among party men, given the wide appeal enjoyed by him, especially in the core North, which the leadership saw as an opportunity for an inroad into the zone.

Ribadu had, last September 17, at a parley with media chiefs in Abuja, declared his intention to run for the office of the president in 2011 on the platform of CAN, while expressing hope that he would succeed.

Fresh from a self-imposed exile, following his earlier dismissal from the Nigerian Police, and arraignment before the Code of Tribunal for not declaring his assets while he was the chairman of the Economic and Financial Crimes Commission (EFCC), Ribadu said he has political antecedent and that politics runs in his vein with his late father being a staunch politician of great repute.

The former EFCC chairman had also declared that he did not plan to wait till 2015 before remaking a new Nigeria, while shooting at political pundits who said he lacks the 'experience' to govern a complex country like Nigeria.