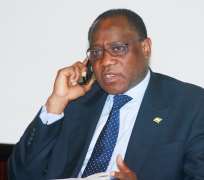 ABUJA, Oct 24, (THEWILL) - The Federal Government weekend reacted sharply to the latest international rating of Nigeria’s economy by Fitch, an international rating agency, saying that the decision to adjust the country’s economic outlook downwards was unduly punitive and unacceptable given the positive features of the oil rich nation’s economy and ongoing reforms.

Fitch had last week affirmed Nigeria’s sovereign credit rating at BB-, but revised the outlook from stable to negative.

Aganga was particularly unhappy that, contrary to some recent media reports, Fitch had not downgraded the sovereign rating of the country. “However, we do consider the decision to adjust the outlook downwards unduly punitive and disagree with it given the numerous positive features of the country’s economy and ongoing reforms cited by Fitch in its recent press release,” he said. Fitch in its latest rating of Nigeria had cited the following as the major reasons for the revision of the outlook: (i) the depletion of the Excess Crude Account (ECA); (ii) the decline in foreign exchange reserves; and (iii) their own concern that the reform agenda of the current administration which they found to be very positive may not be implemented before the elections. Government said it is significant that Fitch recognises the there are many positive measures being taken by the current administration to address these concerns which it describes as the “renewed reform momentum in 2010.”

These measures, according to Aganga include “the proposed establishment of a Nigerian Sovereign Wealth Fund and urgent steps which are being taken to address the infrastructure deficit particularly in the power sector as outlined in the Power Roadmap that was unveiled by Mr. President in August.”Aganga further explained that the measures which Fitch has identified as important for Nigeria’s outlook to return to stable are already being implemented, citing the passing of the Bill to establish the Nigerian Sovereign Wealth Fund which he said was very positive.

According to Aganga, the Bill is being drafted and gave assurance that it will receive a positive and speedy reception in the National Assembly, stressing that government’s expectation is that the Sovereign Wealth Fund will be in place before the end of this administration.

However on Nigeria’s sovereign rating, Fitch acknowledged that its decision to retain the rating is firmly supported by robust non-oil sector growth, a strong balance-sheet with lower public/external debt ratios and a net external creditor position that is much stronger than similarly rated peers.

The ratings agency also mentioned the recovery in oil production as a result of the Niger Delta amnesty instituted by this administration as a key support factor underpinning the rating, in addition to banking, capital market reforms and the establishment of AMCON, to revitalise the financial sector.

Aganga posited that these actions are helping to drive another year of exceptional growth in 2010, with Nigeria’s economy expected to expand by 7.75%, adding that Nigeria’s fiscal position is stronger than those of many advanced industrial economies placing Nigeria in the top ranks of all emerging market economies.

He also said that Standard & Poor’s (S&P), the other major global credit rating agency, affirmed Nigeria’s rating with a stable outlook in August. He assured that the Federal Government remains committed to implementing the various reforms which are designed to strengthen the economy and ensure a strong foundation for growth, infrastructural development and job creation.