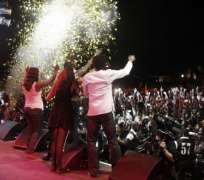 •'He apologized for not supporting our musical career'

For the first time in 20 years, the father of the popular singing duo, Peter and Paul Okoye, popularly known as P-Square, has visited his superstar sons in Lagos last week Tuesday to felicitate with them in their new mansion at the Omole, Ogba area.

The man, who came with his wife and mother of his six children from Jos was pleasantly surprised to see how far his sons have come. He was said to be skeptical initially towards the choice of musical career of his twin sons, P-Squar
Though he visited Lagos about 20 years ago, he has never been to Lagos since his sons disobeyed him and relocated to Lagos in 2005 to pursue their dreams.