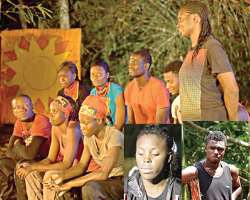 The 2010 edition of Nigeria's most watched and globally rated best television reality show, The Gulder Ultimate Search 7 is beginning to yield unexpected results.

The unfolding scenarios have not only proved media entertainment pundits wrong, global audience of the programme are daily biting their tongues over the sequence of evictions that have proved unpredictably exciting.

The first casualty of the eviction trap was the least of all expectations. It was Dandison Strongface, the 22 year old Rivers state born macho that exuded all courage, strength and the needed can-do ability right from the selection stages.

Strongface is strong, tall, almost 7ft in height and was perceived to be very calculative. Unfortunately, his mental ability decided to make mockery of his physical ability during their first major individual challenge.

The next contestant that got caught in the web of eviction was 21 years old Delta state born Tonia Oduah.
Another surprise eviction after Tonia's was that of the 24 year old handsome Simeon Okorougo, a Lagos based model who hails from Imo state. He is tall and elegant but all that couldn't help him solve a critical riddle that others aced easily.

As the competition gets thicker by the day, and with the eviction of three of the presumably toughestv contenders, the nine remaining members of the order of heroes started getting frenetic. Drama, intrigues, squabbles and tension became their lot.

Sadness enveloped the camp at the eviction of the next victim. She is the oldest member of the camp, Sabdat Bamitale Ahmed. The 27 year old Kogi state born basketball player was the most loved member of the camp. She was nicknamed Mama Jungle because of the motherly role she took up in the camp, caring for the welfare of all her camp_mates.

Her eviction was so painful to the other contestants that after her exit, they decided to immortalize her with a bamboo seat specially constructed and named after her