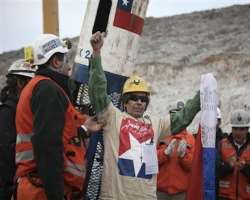 PHOTO: MINER MARIO GOMEZ, 63, THE OLDEST OF THE 33 TRAPPED MINERS, CELEBRATES AS HE ARRIVES ON THE SURFACE. PHOTO CREDIT: REUTERS.
Listen to article


All of Chile's 33 trapped miners were rescued from deep underground in a special capsule on Wednesday as an extraordinary two-month survival story many call a miracle triggered wild celebrations.

Luis Urzua, 54, who was the shift leader at the time of the collapse, was the last of the miners to travel through 2,050 feet of rock to the surface in a capsule barely wider than a man's shoulders.

Celebrations erupted across the country as he emerged to a hero's welcome above the San Jose gold and copper mine in Chile's northern Atacama desert, wearing his hard-hat and dark shades to protect his eyes after spending 69 days in a dimly lit tunnel.

"Viva Chile!" the crowd chanted, as Urzua emerged from the capsule, the light on his miners' hat still on.

Rescuers held up a sign in Spanish reading: "Mission Accomplished."

"I hand the shift over to you and hope this never happens again," he said with a Chilean flag draped around his shoulders, hugging an emotional President Sebastian Pinera. "I am proud to be Chilean."

Rescue workers opened the capsule door and hugged Urzua, who had insisted throughout that he would not leave the tunnel until all the other miners were safely evacuated.

They are all now safe thanks to a meticulously planned rescue operation that went quicker and more smoothly than anyone dared to believe.

The rescue workers who traveled down the shaft to help evacuate them will now themselves be hoisted to the surface in the metal capsule, named Phoenix after the mythical bird that rose from the ashes.

Church bells rang out in Chile when the first miner was extricated and Chileans were glued to their televisions, proud of their nation's ability to save the men in a world-class rescue operation.

"This was the toughest match of my life," said Franklin Lobos, a former professional soccer player who turned to mining and driving a taxi to make ends meet, as he emerged from the mine.

The miners were whisked away for medical checkups and found to be in good health, except for one who has pneumonia and is being treated with antibiotics.

"This is a miracle from God," said Alberto Avalos, the uncle of Florencio Avalos, a father of two who was the first to emerge shortly after midnight.