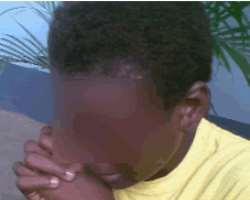 Bola
A 16-year-old girl, who was allegedly impregnated by her father, has narrated how the randy man administered oath of secrecy on her before he deflowered her. She also narrated how the suspect, Sunday Olanrele, used payment of her school fees as a bait to turn her to a sex object.

She said: 'I thought he was a good father. He gave me kolanut to eat and said I would die,if I revealed the secret. So, he started kissing, and caressing me and later deflowered me. When blood started gushing out from my private part, he used pampers to cover it. I did not tell anyone because of fear.'

The victim, Bola (not real name) disclosed how her mother told her to go and bring her school fees from her estranged husband, before he took advantage of it to have canal knowledge of her. 'When I went there, my daddy started doing it again. He kept promising to give me the school fees. I ended up staying with him for many months and he was making love to me severally.'

The last straw that broke the camel's back was when she spent seven days with her father five months ago.

'He slept with me all through and when I got home, I wanted to tell my mother but I was scared. So, I kept quiet,' she broke down in tears. The embattled girl also disclosed how her parents were estranged while her mother re-married, attributing it to her present ordeal.

According to her, their mother did not visit them for five years, while she (victim) was denied the opportunity of visiting her.

It was when she wanted to commit suicide by drinking battery fluid that one of her aunties took her and her younger brother to Ikorodu, Lagos State. It was also from Ikorodu that she went to her father's house. 'While I was in my father's house, he brought out a calabash and kolanut and told me to swear an oath that I would not divulge what he was about to do with me.'

She explained that when her monthly menstrual circle ceased, she did not bother to disclose it to anybody. But her mother was said to have got information about the pregnancy and took her to a pastor, where she spilled the beans. The pastor was said to have given her assurance that she would not die, if she disclosed what transpired between her and her father.

'I told him that my father was responsible for the pregnancy,' she said.

The victim's mother (names withheld) told Daily Sun she suspected a foulplay immediately her daughter came back from her father's house. 'I started perceiving offensive odour and asked her if she visited someone else, apart from her father and she said no. I called the father on phone and inquired the time she left his house and he told me. I reasoned that if she had gone to another person's house, she wouldn't have got home the time she did. From there, I knew something was wrong,' she said, fuming.

The woman disclosed that she later brought a magazine and showed her a story of where a father impregnated his daughter.

'She was devastated after reading the story. That was when I knew that the father had done something abominable.'

Few weeks later, the girl started showing pregnancy symptoms. 'I took her to the hospital for pregnancy test and it indicated that she was four months pregnant. I requested to know who was responsible and she refused to tell me,' she said.

That was when she took her to the pastor where she opened up. The angry mother said she was now faced with the shame associated with the stigma on the family. 'I'm confused, I am ashamed of the stigma. The pregnancy is over five months now. So, abortion is out of it. I'm in a dilemma now. I can't procure abortion of five months old foetus,' she lamented.

The suspect, who admitted committing the crime, said he didn't know what came over him that made him to deflower his daughter.

'I think, it is the devil's plan to destroy me. I know it is an abominable act. I'm sorry, I regret my action. Nigeria police and my estranged wife should forgive me,' he said.