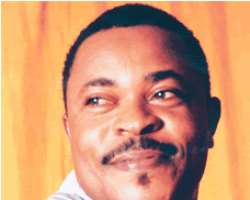 Osuagwu
Few weeks after senior actor, Zack Orji lost and buried his mother in Enugu State, another of his colleague and top entertainer, Victor Osuagwu, recently had his dear mum snatched by the cold and wicked hands of death.

According to still mourning Osuagwu, who disclosed the sad news to us in an emotion-laden voice, Mrs. Janet Festus Osuagwu died a fortnight ago in her home in Imo State, at the age of 81. She was survived by three children, including the comic actor, who's her last child. Speaking further, now orphaned Osuagwu, whose father died in 1985, while he was still in secondary school, lamented the painful death of his mum, whom he described as his engine room.

'My mum and I were so close because she became the breadwinner of our family when my dad died in 1985. Since her death, I've been very devastated, she had five of us, but two died and because I'm the last born, the bond between us was so strong. She was the world's greatest mother and I'm sure that by now, she would have reunited with my dad in heaven,' he said with tears in his eyes.

Shedding more light on the burial plans, Osuagwu whose late mother hailed from Kingstown, Opobo, Rivers State disclosed that the family would soon announce the interment date as well as other activities that would help give the deceased a befitting burial. Also, his colleagues in Nollywood recently set up a committee that will assist Osuagwu in ensuring that his mum goes home in a blaze of glory.