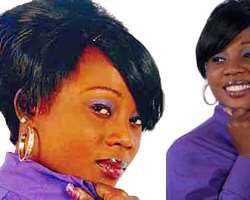 Oyindamola Odesola, a Covenant University graduate of International Relations is really stopping at nothing to live up to the expectations of her fans.

After she made name for herself when she beat 23 other contestants to emerge winner of the last year's edition of the Next Movie Star reality show, the banker-turned-rising star is anxious to record more achievements. In this encounter, she tells HVP how much she's prepared to become the next Genevieve of our time, Omosexy and co.
Listen to her!

I have always wanted to be an actress. After my graduation from the Covenant University, where I read International Relations in 2006, I worked in Skye Bank for over a year. Later I walked out of the job because I was not getting fulfillment in the banking hall.

Somebody told me about the Next Movie Star reality show. I took the risk to resign from my job and entered for the show. Lucky enough, I was selected as one of the contestants. That's how it started.

I think my greatest asset lie in my smile and my personality. I love meeting people and besides, I have a cool personality. I get along easily with people no matter the kind of person I'm dealing with.

How often do you get angry?

I try not to get angry because when I do, I don't look so good.

You must have some movie stars you looking up to?

I'm looking up to stars like Omosexy, Genevieve Nnaji, Funke Akindele, Stephanie Okereke and many others. I pray not only to be like them but also, to surpass their individual achievements in the industry. It's my hope to give my fans the best.

How did you feel when you were named the winner of 2009 Next Movie Star reality show?

The experience was very challenging. But it was fun and very educative. At first, I didn't know I was going to win. It didn't cross my mind at all. But eventually, I started thinking of the possibility and here I am. I was a bit different from those that came into the show just to be a part of it and also have fun. I was focused.

Participating in the show really exposed me to different kind of life because I was just the girl-next-door before I emerged the winner. But now, I'm a role model to my young people. In fact, winning the show has automatically changed my life and made me to learn to believe in myself. I now believe in myself more now than before. I'm more stronger .

At the time you were selected to be part of the show, did it occur to you that you would emerge a winner?

No, even till the final stage I never thought I could win the contest. There were people who were equally good and talented as well as there were others who were not. It was a balance contest, and I didn't feel threatened or intimidated by anybody. Eventually, I emerged a winner.

How has life been with you after the contest?

It has been very exciting as well as tough. Tough because I have to go the extra miles to give in my best. At this stage, I can't afford to disappoint my mum, friends, the company and my fans. I have to stress myself to be at my best. I'm more focused and determined than ever. I work hard everyday to achieve my target.

Are you fully into acting?

Yes, I'm into full time acting now, I'm always on location these days. My winning the Next Movie Star award was a break through for me. People give me roles every now and then, my hands are full:

Acting is an in born thing. It wasn't something that I really needed to undergo training because I was trained during the Next Movie Star show. It's something I had to adapt; it comes me naturally.

Do feel intimidated while on location?

I don't feel intimidated for any reason. Every superstar was once an amateur. This is the stage of my being an amateur. Life is full of stages and I'm in the first stage of my acting career.

You achieved fame very early in life, how do you intend to manage it.

I really worked for my fame, even though, I have not achieved the kind of fame I wanted for myself. I disagree with you to believe that I achieved fame very early in life and cheaply too.

No, I worked for it. It did not come early neither did it come to me cheaply. I don't think achieving fame has gotten into my head because I'm still the same Oyindamola Odesola I used to be. I'm still the girl-next- door and also I still go out to catch funs with my friends. But I try to put a limit to what I do these days.

How much are you prepared to absorb scandal whenever it comes your way?

I have learnt something about being famous. There good times comes as well as there bad times. So, I have learnt to believe that when the bad times finally comes, I should take it in good faith.

The point is that you can't explain to everybody in respect of whether the story carried against you is real or not. But I have advised my family and my friends that whenever they read anything against me in the national dailies, they should not jump into conclusion but endeavour to seek audience with me.

In as much as I'm coming up in the industry, I will endeavour to avoid getting involved in scandals.