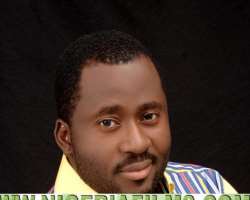 Desmond Elliot is easily one of the fastest-rising stars in the Nigerian home video sector. He shot into limelight through television soap operas: Everyday People, One Too Much and Saints and Sinners. He is one of most sought after actors' and producers' choice for romantic roles. In 2009, he was nominated for the Best Actor category at the Nigeria Entertainment Awards. The Lagos State University Economics graduate enjoys watching movies at home with his family when he is not on location.

Though from Lagos State, the screen star grew up in Jos, Plateau State. He is happy when he puts a smile on someone's face and he loves plantain with egg and a bottle of soft drink.

Desmond, father of two sets of twins no doubt is a ladies' man. That's why he is attracted to them like bees get attracted to pollen. But rather than succumb to pressures, the Nollywood star says, “Being chased is not the issue; what matters is that whenever I perceive that I am about to be chased, I run. I run because I have an ambition which I don't want women to ruin for me. I run from them if they want to go beyond the level of being my fans to another level,” he disclosed.

Flashing him puts him off. “I don't like people flashing me. If you want to give me a call, go ahead and do so. It is of no use flashing me.”
He also detests directors who want to turn actors into zombies by casting them stereotypically into such roles as lover boy, gentleman or tough guy, among others.

Desmond Elliot is athletic in build, but he does not go to the gym often. The rather charming guy keeps fit by eating right.
An ardent believer of the Christian faith, aside acting, one of his ambitions is to become the governor of Lagos State some day. His desire, he says, is to serve humanity