How I made Frank Edoho, Rita Dominic . 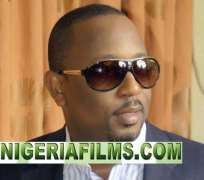 Remember Basorge Tariah, the young, talented comedian who, together with Okey Bakassi, Ali Baba and a host of others, bestrode the Nigerian comedy scene in th 90s like a colossus? All of a sudden, he went into hiding. In a recent chat with NFC, the man popularly known as Grand Master, disclosed the reason for his long break away from the world of comedy. According to him, “The industry is fast becoming a caricature of what it used to be, with all sorts of comedians who steal and perform your jokes on stage and make you lose enthusiasm.”

The multi-talented entertainer also claimed credit for the career success of a number of popular celebrities including Who Wants to Be a Millionaire presenter, Frank Edoho and actress Rita Dominic. “I have trained, groomed and fostered the career of a lot of artistes ranging from Frank Edoho, Rita Dominic, Gentle Giant, De Don, MC Pato among others.”

Even though he is no longer visible the way he used to be in times past, the father of three said he has his hands in many pies, maintaining that what is happening in his immediate constituency is only a reflection of the larger society. “I know a couple of friends in the industry are making every effort to address these issues. But I think it is going to be hard now because you cannot count the number of comedians there are let alone know the new ones coming in. What is happening in the industry is a reflection of our society where there is no respect for culture, rules and norms.

“What makes anybody an artiste is the ability to create. The law also says that if you want to tell somebody's jokes, you should give some form of credit to that person. And you must know the kind of places where you tell those jokes. You do not go to shows and tell those jokes. I have been on TV and aired my jokes. When I turned around, boys who are like my younger brothers, are also telling the jokes. What do you want me to do? I just let them go. I thank God for endowing me with many abilities. I only feel sorry for those whose only stock-in-trade is comedy.”

The Port-Harcourt, Rivers State-born theater practitioner, expressed worry over the general turn of events in the entertainment industry. “The truth is that the industry has largely changed. And the closeness, sincerity, and passion that existed in the industry are no longer there. What now exists in the industry are rivalry, bitterness and aviaries associated with negativity.” And all these, he said, are some of the reasons he had to withdraw from public performance for a while.

We must respect evolution because we have evolved in terms of age and we have grown. In terms of direction and energy, we have also grown. In that regard, we have expended too much and we are trying to conserve. The truth is that the industry has largely changed. We no longer have the closeness that exists in the industry. The sincerity is no longer there. The love and the collective passion are gone. Everyone is now going individualistic, taken over by rivalry, bitterness and aviaries associated with negativity. These have further driven us apart and we hardly have time. So, some of us withdrew for a while and of course we have evolved even in terms of responsibility. I now have a larger family. So I have to be father and husband. And I have always had the philosophy of reinventing and re-identifying my purpose. For a long time, it was a period of evaluation and weighing my options, asking myself what I really wanted to do. That period was what took me away from my fans. But I am back now.

I started a record label very recently called Solid Star Record. I own the record label and trademark. I also went on a brief tour outside the country. I was in Chicago alongside Jedi Gina, the Nigerian-born comedian, who was featured in Daff Comedy Jam and some good Americans. Now I have my own show in Dublin. I am not so good at making noise because once you grow old, everything is about performance. You don't see me performing in a lot of shows here because the industry is becoming a caricature of what it used to be: all sorts of comedians steal and perform your jokes on stage making you not too enthusiastic. And then, again, I also do not want to be largely misunderstood as a comedian. I see myself as a consummate artiste, an entertainer and first and foremost, a theater practitioner. That's why whether you like it or not, I can beat my chest and say, no other artiste has ventured into more areas of the entertainment business than my humble self. I have done everything and I am confident about everything. But I do not just want to be identified with a particular area of the art.

I have political interest. I wanted to run for the House of Assembly in Rivers State. But after due consultation with my people, because I have two brothers who are also vying for the same position, I felt that they will do more justice to the Assembly, so I decided to step down. But I hope that in future, I might get political appointment like Richard, Okey Bakassi, Ejike and Clem because we have a lot to give. I have been in show business for 30 years and there is no area of the business that I do not understand. Most importantly, I understand the social values; I see its relevance socially as it affects the young ones. I know how to use it to groom people because I have trained, groomed and fostered the career of a lot of artistes ranging from Frank Edoho, Rita Dominic, Gentle Giant, De Don and MC Pato. The list is endless. I understand how young people think. I understand their idiosyncrasies, I know how to reach them. I have a programme which is directed at discoverying and encouraging and bring hope to young people because I have been in this industry long enough to know what the youth need. The art and entertainment are largely an alternative source of employment. The government should recognize this strength for redirecting the energy of the young people for refocusing and building hope. I am not going into politics because of the money. There is no doubt that there is money in politics. There is no doubt, but because I am worried; I am 43 years old. At 50 years, I will not have energy to correct the ills in the society anymore and the time runs so fast. Before you know it, there is a new dispensation and a new election and yet, we do not have the young minds to correct these ills.

Look at the crisis in the Niger Delta; it resulted from the abandonment of the young people there. Today, they will say that they are aggrieved because of resource control. But how many young boys know where the resources are controlled or how they are controlled? The truth is that in that region, so much money was thrown around that young people started losing the decency to work over time to develop a future to earn a reasonable living. So, they all started taking shortcuts to immediately copy the lifestyle of the people who are making oil money and spending them on the girls they could not even talk to because the men were giving these young girls too much money. So they wanted to make money and live like that and drive big cars. These vices that provide short terms fortunes that was there hope and they went into it. And as they were going into it, they lost interest in education. And those who were already in the universities, who came out now, saw the ones who did not want to go and became masters to the slaves, led them through cultism which was a small culture that they have acquired in school and turned it into something wider. It became a gang and cult affair. And the politician also saw this and employed them. And gradually, the society broke down. I know and lived in the neighbourhood from where the whole problem of the Niger Delta violence broke out. That is Port-Harcourt. A group called Eslanders, led by a notorious ex-cultist, started that whole development and then the students fell in love with it.