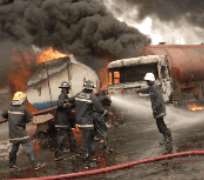 The incessant death and docility of the enforcement agencies to stop this problem from occurring cause many Nigerians who are targets of the disaster, who have lost family members and beloved ones pains.

Kapi Lekwa Okonkwo, a petroleum dealer bemoaned that it is totally callous for a government that claims to have the interest of the citizens to close its eyes and allow the people live in avoidable danger.

Abdulraman Issa, businessman
On the Lagos-Ibadan expressway, the federal and state governments should put things in order. It is unfortunate we have a government that does not listen to the cries of the masses. Will the government say they do not know what to do? Don't they see those trucks parked on both sides of the road? If you go to Kano, where I come from, you cannot see tankers, trailers or heavy trucks parked on the way. That was one thing former military governor of Kano State, Audu Bako did for the people. He built a garage for them to transact their business. You cannot see them on the road or streets like you see in Lagos. Running into them is real problem and danger. If they have brake failure it causes havoc. Let them be removed completely from the road.

Miriam Ikeh, unemployed graduate
Accidents on Lagos – Ibadan expressway, especially on that Berger end is getting out of hand. Yet, it is not only accidents that constitute danger on that road because the robbers are there to terrorise.

But the accidents call for attention from the government. Those heavy trucks should be removed completely from the expressway. I can't believe the roadsides are the best and only place for the trucks to park on the Lagos – Ibadan road. The Lagos State Traffic Management Agency (LASTMA) should be sacked or reformed. They are the cause of most accidents on Lagos roads. When I was coming back from Ibadan today, I was disgusted watching LASTMA officials chasing a commercial vehicle. In that situation, vehicle could run into others and that is what causes multiple accidents.

Chuks Onyia, Transporter
Let the people who drive those duty trucks go on intensive course. They should be properly educated. Knowing how to drive is not about starting the engine and getting it on the road. Some of these drivers cannot read road signs and are not trained to see dangerous roads ahead. The drivers are not the only ones to blame. The roads are bad, including the Lagos-Ibadan and Benin-Ore roads. Government should do something to fix these roads.

Festus Onyejema
The Redeemed Christian Church of God should be removed from that point it is located on the Lagos-Ibadan expressway. Let them move inside and stop blocking the road. The obstruction they cause stretches from the old tollgate towards Berger and Redeemed. At the end of every month when they hold their functions, there will be no access. Apart from the roadblock, the road is bent, the tankers and trailers cannot see well. Before they could control the vehicle incase of any emergency, the damage is already done. Let that road be expanded by the government. It will definitely reduce the accident rate.

Sampson Onyeze, driver
All the trailers should be removed from the road and let LASTMA officials know why they are employed. They chase shadows in the name of carrying out their duties. A whole lot of blame should be narrowed to the government for neglect of the roads. There should be proper enforcement and compliance with safe road use. There are many potholes on roads, and that is not what is expected to be on a Trunk 'A' road. On the Lagos-Ibadan expressway where these accidents occur, LASTMA is not sighted there at all because, it does not cover their area of jurisdiction. You can only see LASTMA at the end of Ojota

Abuchi Okoye
If the government can construct a roundabout at that Lagos-Ibadan expressway, it will reduce the rate of accidents on that road. A roundabout will slow vehicles down on the expressway and, give opportunities for some slow movement and waiting. But then, the road needs rehabilitation.