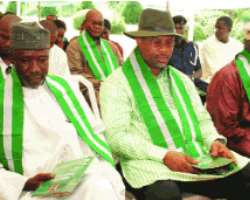 The expansive Voledrome inside the National Stadium, Abuja provided a veritable venue for the maiden edition of National Exhibition on Independence tagged: Journey through Independence. The exhibition of sculptures, paintings, textiles and mixed media works opened on a grand note with a vision to reflect the struggles and historical events that were associated with Nigeria's Independence on October 1, 1960.

Organized specifically to celebrate the country's golden jubilee, the national cultural and historical exhibition featured an array of creative works by notable artists drawn from across the country. Among these was the imposing bronze sculpture of Queen Elizabeth of England.

The work, which is almost double the size of the Queen (in real life), was produced as a tribute to the Queen in 1956 by the late artist, Ben Enwonwu, shortly after the Queen's visit to Nigeria in the same year.

Aside Queen's bronze work, there, was also a larger than life wooden sculpture of Okonkwo (protagonist of Chinua Achebe's Things Fall Apart) produced by the highly talented and prolific Cyril Nwokoli. There was also Kainebi Osasheye's installation art produced with empty can of beverages. The work, which stands out in the central part of the hall, represents one of the fascinating pieces rooted in contemporary genre and for which Kaniebi is known to have promoted in recent years.

Since the Velodrome was actually reconstructed to suit a befitting venue for the national exhibition, it was no surprise for guests who thronged it to see it hosting hundreds of ancient and contemporary artworks in one singular show. Some of the great works, which expectedly symbolize Nigeria's diversity, equally depict treasures which men and women in the creative sector have left for posterity. Among the invaluable works were craft, sculptures (metal and wood) indigenous textiles and fabrics, paintings as well as wood carvings. Also on the list were such priceless, classical works, including the Ife bronzes, Nok, Igbo-Ukwu and Benin heads and others accessories.

Meanwhile, the three Curators, including Mr. Nath M. Adediran; Director of Museums, Mr. Uwa Usen, President, Society of Nigerian Artists, and Jerry Buhari of Ahmadu Bello University, Zaria, equally doubled as theJury for the exhibition. According to Buhari, despite the fact other sectors of the economy had roles to play in the celebration, the exhibition placed value on the role of art in national development. It also underscored the significance of art and creativity in the independence celebration.'' His words 'The role of art in nation building could be seen in the kind of place given to the arts. The creative energy of Nigerians as seen in the works makes a serious statement on the place of art in national development.”

He added that the exhibition which runs for six weeks is the first of its type which Nigeria organized to encapsulate the entire essence of the nation's 50 years of Independence. Also, Mr. George Ufot, Federal Director of Culture and Chairman of the Exhibition Committee of Nigeria at 50, described the exhibition as the first of its kind considering its size, the level of participation and the unprecedented government's collaboration with the private sector.

Some of the agencies and parastatals under the Ministry of Tourism, Culture and National Orientation that showcased cultural products iinclude Centre for Black African Arts and Civilization (CBAAC), National Gallery of Art (NGA), National Commission for Museums and Monuments (NCMM), National Council for Arts and Culture (NCAC) as well as the Nigerian Tourism Development Corporation (NTDC). On the list of other participants were Yaba College of Technology, University of Lagos, Ahmadu Bello University, Zaria, Institute of Management Technology (IMT), Enugu, Grillo Pavilion, Society of Nigerian Artists, Female Artists Association of Nigeria, Dajo Pottery, Nike Gallery and Professor Bruce Onobrakpeya