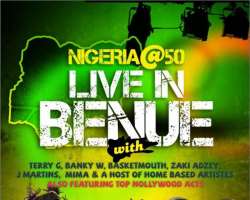 Entertainment has no doubt taken the centre stage in Benue, but the ante of entertainment in the state is about to be taken a notch higher as Terry G, Banky W, J Martins, Basket mouth, Zaaki Azzay, Omotola Jalade Ekehinde, Desmond Elliot, Uche Jumbo, Monalisa Chinda, clem ohanmeze,Benue born upcoming musician Mima and others will be storming the IBB square by 6pm on the 1st of October for another trail blazing musical concert, 'Nigeria @ 50, live in Benue'.

Guests are in for loads of fun as Desmond Elliot will be joining the screen diva Omotola Jalade Ekehinde on stage as MCs of the event. Also expected at the event is Governor Gabriel Suswam,his deputy, chief steven Lawani OFR and other top Benue State government officials.

A history of successful entertainment programs held in the state include the Democracy Day Concert 2009 and 2010 edition, Benue Night of Music and Comedy, Benue Music Festival and featured notable stars like 2 face, 9ice, Gordons, I go Die, J Martins, Basket Mouth and so many others. All of these events was organised by Love Idoko led Dream Pointers int'l Limited, the same company putting together 'Nigeria @ 50, live in Benue' on behalf of the state.

Indisputably, the people of Benue are in love with entertainment; a proof of this is the Democracy Day Concert held in May that had the 40,000 capacity stadium venue filled to the brim and people on their feet dancing despite the rain. This is what the state government under the leadership of Governor Suswam saw when they decided to harness the talents of the youths through the entertainment mediums.

Speaking on the event,CEO of DREAMS pointer int'l Ms. Idoko said 'we look forward to a successful event by God's grace &plans are in top gear to make it a memorable one. It will also be a platform where the giant stride and achievements of the benue state government will be showcased'.