Why men beat their women 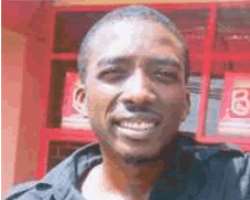 Go to any place where a wedding is taking place and observe the gaiety, excitement and beauty of the coming together of a man and a woman, you will promptly feel the urge to also walk down the aisle with someone.

Ordinarily, marriage is beautiful. God ordained it to be so. That's why when the first man saw the first woman, he exclaimed: “This is the bone of my bones, and the flesh of my flesh!”

It is for this reason that the Good Book says that a man shall leave his father and mother and be joined to his wife to become one body and one soul. This also presupposes that the two are one and what affects one affects the other. It is also expected that love, trust, understanding and patience will be the oil lubricating the relationship to make it work and fulfill the purpose of God in instituting marriage: friendship and companionship for life.

Unfortunately, marriage does not always turn out to be like what God envisioned. And this is an all too clear reminder of the corruption that came into the world following the fall of man at Eden.
Today, you find some men transform overnight into a nightmar, and become a Mike Tyson at home, turning their wives, the same ones they fed cake at the wedding reception, into punching bags at the slightest provocation. Invariably, many sane people are left to wonder whether the couple are no longer one body and soul as God Himself originally planned.

The rampancy of wife battering has made social scientists 'burn' hours in research efforts attempting to explain why some men exhibit this aberrant behaviour. Though scientists have come up with findings on why and how this 'twist' occurs in the nature of man, turning once loving man into an unfeeling hard heart that relentless batters his wife, the fact remains that every environment has its peculiarities as much as America is completely different from Africa.

In the African setting what is responsible for this ungodly tendency of men to turn their wives into punching bags? Sunday Sun asked some notable personalities and what they said is quite revealing. Excerpts…

Nagging works a man up –Bright Chimezie
Bright Chinmezie, singer and musician: There are lots of reasons but I think the most prominent of them is nagging. When a woman is always nagging, the man gets worked up. You know that women talk more than men and when such becomes the case, men resort to physical assault.

Some men are naturally violent –Mike Aremu
Mike Aremu, Christian motivational speaker: I think some men have violence as a natural trait. They cannot control their temper and because they don't know when to draw the line, they batter their wives to prove a point. Battering one's wife is like an abomination; it is not the right thing to do because it just shows how animalistic such men are. There are other ways to correct a wife without battering her.

Only mad men beat their women –Bovi Ugboma
Bovi Ugboma, entertainer, compere and TV presenter: Any man who does that is mad because even the bible says that it is better to stay at the roof top than be in the same house with a nagging wife. So, there is no excuse whatsoever to batter one's wife. Women sometimes can be nasty because they talk more than the men and this always brings about assault and battery.

A woman who can't cook...
Dr Uchendu Alaefule, medical practitioner and grassroot public health awareness campaigner: Several reasons could be attributed to why a man would beat his wife. Some women out of laziness or sheer negligence fail to satisfy their husband's stomach needs. There is a saying that a hungry man is an angry man and if a man has given enough money for feeding and upkeep of the home only to come home and find the dinner table 'undecorated' with inviting delicious food, he would be tempted to descend on the woman especially when she used the money to buy such things as jewellery and cosmetics.

Also, wife battering can happen where there is lack of understanding between the couple. This exposes the man to rumour about his wife without confirmation, which ultimately leads to unnecessary beating. Women also talk too much and for a man who has reached the limits of his endurance, the last option he has is his hands.

What does a battered wife do?

Open up, don't suffer in silence
Dr Joe Okei Odumakin, human rights activist: Any woman that finds herself in that kind of situation has to brace up to the challenge because marriage is a life contract, most importantly if children are involved. I do not often advise the woman to leave or divorce her husband, but one thing she must surely do is not to keep quiet mouth on the issue.

She must make sure that she doesn't make herself available for battering. She must try to move away from her husband if the argument becomes hot and she sees that the husband is likely to hit her. She must also avoid any situation that will lead to argument, which will result to battering. If it happens very often, she should report the matter to any of the NGOs that work on women issues. The husband will be invited for counseling and advice.

She should report him to the family's spiritual leader (either a pastor or an imam) for necessary intervention. The last intervention, which I do not often advise except when it becomes very necessary, that is where all other interventions failed, and the man is unrepentant, then the woman should have the man arrested by the police and she should seek redress in the law court.

In this case, the man is stopped by law from battering his wife or a separation is granted until the man comes to realize his folly. However, in all of these, the woman experiencing battering must be able to open up and not suffer in silence; that is the first important step to take.

I'll walk out...
Easy Lizzy, Nollywood actress and entertainer: I can't take it. It shows he doesn't love me. So, I would consult my in-laws who would try to call him to order but if he does not stop, I will walk out on the relationship because my life is at stake.