SUPPLEMENTS FOR OSTEOARTHRITIS ‘DO NOT WORK’ 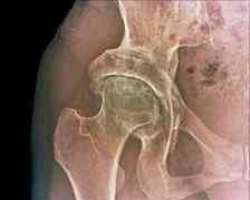 Past studies of glucosamine and chondroitin have been conflicting

The review of 10 previous trials by Bern University in Switzerland found glucosamine and chondroitin did not have any beneficial effect on osteoarthritis of the hip or knee.

The supplements are not normally given on the NHS, although they are bought over the counter in UK pharmacies.

But the researchers said they did no harm so if people wanted to continue taking them they could.

This is because of the so-called placebo effect, where symptoms improve because a patients feels better psychologically for taking a substance.

'
Start Quote
If a patient is eating a balanced diet then do they really need supplements?'

Dr James Kennedy
GP
Researchers analysed the results of tests on 3,800 patients, assessing changes in levels of pain after patients took glucosamine, chondroitin or both together.

They then compared the effects with patients who took a placebo, the British Medical Journal reported.

Lead researcher Professor Peter Juni said: “Compared with placebo, glucosamine, chondroitin and their combination do not reduce joint pain or have an impact on narrowing of joint space.

“Health authorities and health insurers should be discouraged from funding glucosamine and chondroitin treatment.”

But the researchers argued that given these supplements were not dangerous there was no reason for patients not to keep taking them if “they perceive a benefit and cover the cost of treatment themselves”.

Global sales of glucosamine supplements reached nearly £1.3bn in 2008, although very few are funded by the NHS as they are not recommended by NICE, the official advisory body for the health service.

New cartilage
Glucosamine and chondroitin are natural body chemicals which go to make up cartilage, the natural shock absorber in our joints which prevents bones rubbing together.

Some glucosamine and chondroitin is made by the body, but taking them as supplements is thought to boost the production of new cartilage.

However, Dr James Kennedy, of the Royal College of GPs, said he had never prescribed them to a patient.

“If a patient is eating a balanced diet then do they really need supplements?” he asks.

“NICE makes it clear in their guidelines on osteoarthritis that while they don't feel there's enough evidence to warrant the NHS paying for the supplements, some people may want to consider an over-the-counter trial as part of a wider self-management plan which includes exercise and keeping to an ideal weight, and we would support that view,” she said.

The researchers' conclusion also supports the view taken by the Scottish Medicines Consortium.