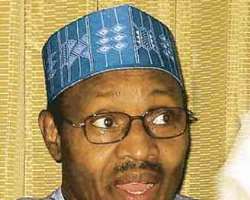 Buhari
The presidential candidate of the Congress for Progressive Change, Gen. Mohammadu Buhari (retd.), on Thursday in Kaduna said he did not hold any discussion with President Goodluck Jonathan on the 2011 elections during his visit on Monday to the Presidential Villa, Abuja.

Buhari, however, said he had no doubt that Jonathan would ensure the conduct of credible elections next year, stating that the President's participation in the poll would not affect its conduct.

He assured that he would back any government put in place as a result of free and fair elections conducted in the country.

The former military head of state also vowed to continue his fight against election rigging by politicians, to protect the nation's democracy.

Buhari, who spoke during a Kaduna State Radio programme, 'Vision Nigeria,' explained that his visit to the Presidential Villa was informed by the invitation extended to him by Jonathan to break his fast there.

He added they didn't discuss the forthcoming elections while the meeting lasted.

He observed that although it was normal for two leaders to discuss issues affecting the well-being of their nation, he and the President did not do so.

'I went there to honour the President's invitation to break my fast. There were about 20 people there. We did not talk on any issue.

'Right from my car, I went straight to the breakfast table; and after that, I went back to my car and left. So, I don't know where people got the idea that we discussed. That is not true,' he said.

Buhari also recalled that he spent 50 months in the courts challenging the conduct of both the 2003 and 2007 presidential elections, because the results of both reports by local and international observers said they were fraught with irregularities.

He noted that when the Supreme Court declared the late President Umaru Yar'Adua as the winner of the 2007 presidential election, his fate in the Nigerian judiciary was shaken.

He, however, added that since the Supreme Court was the nation's highest court, there was nothing anybody could about such a judgment.

'If people are well informed and well led by their constituencies, I don't think we should be afraid about whoever wants to contest, including the President himself. I always bring the case of Bauchi, Kano and Lagos.

'When the elite there believed in changing the government, they mobilised their constituencies and they changed the government. If the governance of those states eventually becomes something else, it is a different matter.

'But the fact is that the capacity to organise and deliver is there and the elite must take it this time around,' he said.

Buhari declared that steps taken so far by the President, including the nomination and appointment of Prof. Attahiru Jega as the chairman of the Independent National Commission, the signing of the Electoral Act 2010 and the release of funds to the electoral body were clear indications that he was ready to fulfill his promise of conducting credible polls next year.