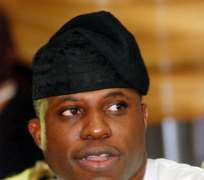 Dimeji Bankole
The last has definitely not been heard about Speaker Dimeji Bankole's involvement in the N5.2 Billion Rural Electrification Agency scandal.

Pointblanknews.com leant that contrary to claims by officials close to Bankole, the Economic and Financial Crime Commission (EFCC's) interim report on the investigation, did not absolve the Speaker of wrong doing. The EFCC is prosecuting the Chairmen of the House and Senate committees on power, Ndid Elumelu, and Nicholas Ugbane, but left Bankole off the hook. The trio reportedly presided over the contract scam.

Of the 45 solar electrification projects awarded under the watch of Bankole, his dad, Alani Bankole, his brother and his cousin got 10. The 10 companies got a total of N690 million. The companies got 100 per cent payment one month after it was awarded on November 28, 2008. Some of the companies are Zobra Global Services Ltd, Vulysteke Metallic Construction, Panthenol Acropolis, F-Plus concept, and Complete Trade Ltd. All the award letters to those nominated by Bankole had same reference number…FMPS/4831/Vol 64/November 28, 2008.

One of the Speaker's spokesmen, Idowu Bakare described the claim of the EFCC as ludicrous, and a grand design to blackmail his boss. According to him, the EFCC has not been able to establish, members of his family benefited.

However, the recent invitation of Bankole's aides by the ICPC has not helped the Speaker. Kayode Odunaro had in a petition to ICPC tried to extricate his boss from the mix, but his statements, we learnt, did not help his boss .According to Odunaro “ On July, 29, 2009, Elumelu said he would want me to meet a UBA Bank official to discuss the possibility of getting some checks cleared into some companies accounts. He made me to understand that the companies some of which he claimed belong to family members of the Speaker, were among those that got contracts from the REA..”

A highly placed sources at the commission told Pointblanknews.com ' We don't clear people, the courts does…we did not clear him. Of course, we are prosecuting Nicholas Ugbane, and Ndidi Elumelu because we tidied up evidence on them. As for the Speaker, investigations points to the fact that he has case to answer…that he nominated companies, including that of his family, used some ladies as fronts etc…but if you don't have an air tight case, you don't prosecute. Knowing the records of the Speaker, are you saying he would ignore his family in such a contract jamboree..”

The source also explained why the EFCC declared two very key witnesses wanted. They Angela Oselukwe, and Uduak Akpan Israel. The two ladies, Pointblanknews.com learnt were signatories to the account into which some cash were paid for some beneficiaries of the contracts.

Our source also said before the EFCC stepped there were evidence that the speaker's men tried to destroy evidence at the power ministry. Even the Bureau Of Public Procurement (BPP), during auditing found out 16 files were missing.

Said our source “ the two ladies are key to indicting the Speaker. We found out that they were signatories to the account used to pay some of the monies. We have declared the two of them wanted. We need those two ladies . “