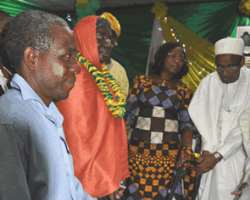 Prof. Rufa'i, Princess Sosan and Dr. Mohammed presenting the science kits to one of the principals at the event


The Universal Basic Education Commission (UBEC), has distributed 2,548 science kits worth N711million to some Junior Secondary Schools (JSS) across the 36 states of the federation and the Federal Capital Territory (FCT).

Speaking at the flag off ceremony for the distribution of the kits held in Lagos, the Executive Secretary of the commission, Dr. Ahmed Modibbo Mohammed, said the Federal Government gave the approval to fulfill one of the commission's mandate of ensuring quality basic education delivery.

According to him, each state will receive 70 kits while the Federal Capital Territory (FCT) will get 28. He explained that the N711m used for the science kits was the balance of funds that accrued from the Home Grown School Feeding and Health Programme (HGSF&H).

UBEC chief disclosed that part of the funds were used to procure 8,427,687 textbooks in core subjects for primary 4 pupils and assorted library books for senior secondary schools just as N709.8m was spent last year for the procurement of 2,331 science kits which were also distributed to selected schools across the federation.

He explained that the federal government decided to distribute the kits to make the learning and teaching of sciences easier.

Dr. Mohammed said the science kits would enhance the teaching of science in schools as well as build capacity of teachers since each is packaged with a training manual. He added that the science kits, which were designed and produced by the National Agency for Science and Engineering Infrastructure (NASENI), contain basic science equipment, accessories, charts and models packaged in leather bags with 20 per cent of the items included as spares.

While imploring the beneficiaries to use the kits wisely and with great care so that import of the provision would be realized, he added that the commission would sustain the intervention with improved funding and special grants.

The Minister of Education, Professor Ruqayyatu Ahmed Rufa'i who unveiled and presented the kits to some schools in Lagos said it was part of the federal government's intervention to enhance the development of basic education in the country.

She said: 'The administration under the leadership of President Goodluck Jonathan believes in human capital development because this is the only avenue through which the nation can develop technologically, socially and economically. Education is fundamental to all forms of development and that is why government is committed to its vigorous pursuit by providing the enabling environment and other necessary resources.

'What we are witnessing today presents an evidence of this commitment. The provision of science kits indicates the priority that the federal government accords education especially at the basic level. It is the belief of this administration that making these kits available in our schools will give proper footing to the teaching and learning of science and prepare our junior secondary school pupils for future academic pursuits in science.

'It will also in the long run provide the personnel needed for technological development and advancement of Nigeria, a requisite for us to actualize vision 20:2020'.

She called on the states to complement government's efforts by procuring more kits until all junior secondary schools have adequately benefited form the initiative.

The minister congratulated UBEC for fulfilling one of its mandates, noting that the initiative would go a long way in providing qualitative teaching and learning of science in junior secondary schools.