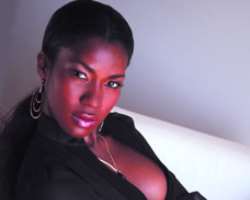 Stephanie
They are very busy but not on movie locations or preparing to face the camera. Each of them has her hands in another pie other than the usual 'light, camera and action' terrain. Stephanie, who broke the cinema jinx with her movie, Through the glass, is on a mission to five Northern states to preach the gospel against VVF. She is negotiating with five states including Sokoto, Kano , Kaduna , Bauchi, and Zamfara on her project to stop the plague of the dreaded but avoidable disease.

Stephanie is planning to shoot a documentary on VVF which is ravaging northern Nigeria. Though presently shooting in Asaba, Stephanie earlier in the week visited Zamfara State to firm up an agreement on the project which would be partly sponsored by the state government.

Omotola is preparing to release an album titled Me, Myself and Eyes come September 24 and 26. The actress who has finished work on her 12 track album is busy putting finishing touches to the musical work produced by Del B and Paul Play. She has released two videos, and we were told she would release the third video, Through the fire, featuring Paul Play before the album launch proper.

The album launch would take place at a secret venue in Lagos before dignitaries including government officials and celebrities. We learnt table spaces are being sold and only guests with invitation cards would be allowed in on September 24, while the September 26 event will be for her fans and would take place at Fantasyland. Omotola will also launch a pet project, Give and Let Give on that day. The project will provide a platform for Omotola's fans and friends to bring gifts no matter how small for a number of orphanages.

Ebube Nwaigbo, the delectable actress isn't singing nor acting. She is simply importing posh hair, an alternative to expensive lace wig. The actress who has taken delivery of the first batch of this product is already marketing what she calls 'Posh hair', a 100% synthetic hair with the same texture as lace wig but very affordable. The wig we learnt goes for as low as N3,500 with another range going for more.

She has not taken time-off acting, but she is just exploring the business side of her.