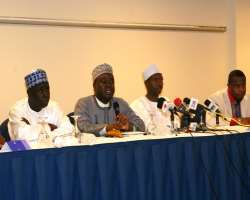 
ABUJA, August 20, (THEWILL) - The organization of Petroleum Exporting Countries (OPEC) through the OPEC Fund for International Development (OFID) has so far committed about $9 billion dollars in developing poor countries that are outside OPEC membership.

The duo said OPEC provided the seed money for the take-off of the International Fund for Agricultural Development (IFAD), an organ of the United Nations that has assumed a reference point in agricultural policy matters globally.

Dr. Ibrahim was however unhappy with the inhospitable environment in which the Nigerian Press operates comparable to their peers in America and Europe, remarking that even the poor environment has not totally diminished their capabilities as their reports are highly respected in the international arena.

He attributed the development to poorly funded working environment, lack of modern reporting tools and bureaucratic decision making, stressing that they heavily rely on external reports most times in reporting OPEC stories and called for a reversal of the trend among media owners to give the Nigerian press the leverage to perform optimally.

He called on energy reporters to as a matter of urgency help themselves in their reportage through the many channels of communication available within OPEC, namely, OPEC daily updated website, calls to the Secretariat, and electronic mails to the Public Relations and Information Department (PRID) stating that the avenues are there 24 hours.

General Manager, Inter-Governmental Affairs of NNPC, Dr. Mohammed K. Amate and General Manager, Community Relations in their remarks said that Nigeria’s membership of OPEC in the last 39 years have not been in vain, reasoning that 90 percent of Nigeria’s total earnings come from oil sale and there should be cause to celebrate.