I Got My Stage Name From My Jewellery —D’Bling 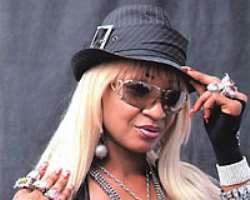 WHAT is your real name?
My name is Amaka Lynda Raphael Onwumelu. I am from Ude in Enugu State. I am an actress, model and singer.

The British accent of yours is something else. Were you born in the United Kingdom or did you school there?
Well, I lived in London for seven years, so that was how I came about the accent. Not that I schooled there.

So, you had your education in Nigeria? Tell us about your educational background?
Yes. As a matter of fact, I am just planning to go to the university to further my education but I did my primary and secondary school education here. The fact that I didn't finish my university education, having no degree, is one thing I didn't like, but I am working seriously on that because to me and my parents, education is vital. I also have a Diploma in Computer Studies from the University of Lagos. I was briefly in Ekpoma University but along the line, I dropped out because I had to do some other things, I travelled to London to work.

What exactly were you doing before you travelled?
I was modelling even while in school. As a matter of fact, I started modelling at the age of 16. I worked for Modella and a couple of other agencies and designers. I started modelling with the likes of Lilian Bach, Kate Henshaw, Eucharia Anunobi. Then I went into movie, my first job was, A Queen For Domingo of Itshekiriland, where I played a major role i.e second lead role alongside RMD. He was the lead actor, while I was the lead actress and it was a stage play, that was my first movie role.

After that, I worked with Tunji Bamishigbin in Scheme and Palace. But on Scheme, I worked with renowned practitioners like Liz Benson. After that, I did a couple of home videos like Flashes of Death, where I did a major role, it was produced and directed by Elvis Chuks. I also acted in Agwu, produced and directed by Emmanuel. I did a couple of jobs before travelling but the last job I did before I left was with Shan George in Last Target, where we both played lead roles.

Have you produced any movie of your own?
Actually, I was thinking of doing that before I left the country for the United Kingdom. Besides, when I was acting, there was no pay in the industry then, all we got was just peanuts, it was not really rewarding back then. And then I was also in school, so because of the low pay, I got frustrated and just left the industry and the travelling also clicked. When I got to the UK, I started modelling and doing some other jobs but the modeling job over there was really rewarding, the money was flowing.

I was there for seven years. Then I saw my fellow artistes coming back home for awards, people like Lilian Bach, and I was quite impressed at the development and I said to myself that finally, it was time to go back home and contribute my quota to the development of the entertainment industry in Nigeria.

Though, I acted and modelled, music has always been my first love. When I was a young girl, I always composed songs and danced. In school then, on the playgrounds, I would sing and dance. So, music has been my first love, from music I went into modelling, then into acting and now, I am back into music which is my love, my passion.

So, when did you come back and having been away for so long, what was the reception you got from other practitioners in the industry when you returned?
I came back in 2007. When I just came back, I was invited for Dele Momodu's Ovation red carpet because he was my friend. He was a good friend before I left the country, even Quincy, Festus Keyamo and a host of others, we were all good friends back then.

They used to call me the queen of showbiz way back then. I have been in this industry since the age of 16 but the reason I'm not so popular is because I keep going and coming and you know that tends to make you lose contact and relevance in the industry.

Anyway, I am back for real now and with a bang too. At the red carpet, I saw my old friends like Muma Gee, ArtQuake i.e the Alanta singers etc and when I was getting into the show, the paparazzis were all over me taking my pictures and asking me when I'd release my album and then I was just an actress/model, who just came back to the country.

So, I was surprised when I got to the show and they were all asking when I'd drop my album, I was like this must be God at work.

Was that what actually geared you into music? I mean the voice of the people or the voice of God thing?
I think to an extent, it was part of the reason. And of course, music has always been my first love, don't get me wrong. As a child, I have always composed rap songs, hold an imaginary microphone which was my hair brush, stand before the mirror or my friends, sang and danced. I had this big poster of late Michael Jackson in my bedroom. So, music has always been in me, it was my root.

Was Michael Jackson your inspiration?
He was my idol. I still love him. So, when they kept asking when I'd release my album, I had to just tell them soon then. So, Muma Gee, Artquake and the rest were all like, you must come into this industry, this is where God wants you to be, this is your calling. You belong to music and not acting. So I said okay, I've always loved music but I was waiting for the right time.

Then Artquake came to me and said we must do something together and I reminded him that I'm a rapper, so he challenged me and said now is the right time to take it up. He challenged me to the studio and I had to quickly compose something and that was when I came up with my first single, 'Lets Bling'.

How did you come about your stage name D'Bling?
After the first single, I thought to myself that I had to choose a stage name for my music career, so I decided on D'Bling because I love blings jewellery. I came to the ovation red carpet with all my jewellery blinging and my friends said you are looking for a stage name? You already got one, see your blinging, you are the bling! So, that was it. I love to bling.

So, have you dropped your album?
Yes, I got two singles now. The first was Lets Bling, I shot the video last year and the second is Sexy Nigerian Girls which I'm already promoting the video and soon, I'd be off to South Africa for that. I just finished shooting one of the hottest tracks in my forthcoming album which I will release by the end of the year.

When you decided to go into music and showbiz, what was your parent's reaction?
That is a very interesting question. It was tough initially. To make it worse, my dad was a military personnel and my mum was a pastor, what about that? Interesting? It makes it even worse. Isn't it? My dad, though late now, almost disowned me when he found out. It wasn't easy at all, it was hell. But my mum was, however, supportive, my dad was like no way, not my own daughter. This was because then, entertainers were seen as dropouts and no-do-gooders. He said my own daughter, a model? No way! So he vehemently objected to it. Well, he is deceased now, so I have my freedom to follow my passion.

How many are you in your family? Is it a large family?
Not really. We are six and I am the second.

Is any of your siblings taking after you?
Two of us actually are into entertainment. My immediate younger brother is a rapper too. He is in Nigeria too and he is called African rapper 50.

Can you throw more light on your life back then as an actress/model, your experience?
As a matter of fact, it wasn't really easy then because some of the producers would demand to sleep with the actresses, but these things happen abroad too, it's not just in Nollywood, it is everywhere.

Back in the days when I was acting, it was peanuts, we didn't get paid well. I was lucky, however, because I got into the industry as a big girl. I had my Mitsubishi car. I have always been blessed, as a young actress then, I was the only one who owned a car.

I remember that then, Ramsey Noah, Kate Henshaw and the rest didn't have a car because we were poorly paid, but I was blessed before coming into the industry.

It was only me, but thank God, the industry and the practitioners have improved progressively. What I'm trying to say is that, I could ignore and suppress any harassment from the producers because I was quite comfortable and I was good, so I wasn't desperate for role. I was picked for roles because I was good. But sexual harassment was there then to give a lady the lead role.

Do you think the sexual harassment syndrome can affect the industry negatively, like projecting unprofessional actresses and giving awards to those who succumb to the producers' wish?
The entertainment industry is different in some ways. It would be very difficult for that to happen in the music industry because if you can't sing, then you can't sing. I don't see any music producer wasting his investment on an artiste who can't sing just for sex. That will be stupid. But it can easily occur in the movies sector because there are other practitioners in the industry to sell the work of art. It must really be curtailed for Nollywood to see development. We need to project talents.