WE WILL TAP NATIONAL YAM FESTIVAL TO CURB KIDNAPPING, ROBBERY 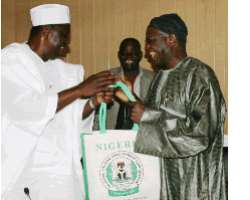 The 'Igwe' of Igbo Ukwu, HRH Martins Nwafor Ezeh, has said that apart from its entertainment value; the National Yam Festival can be tapped to arrest kidnapping, armed robbery and other vices plaguing the Igbo nation.

According to this traditional ruler, relevant sermons of peace and responsible citizenship can be easily passed on to innumerable people during the fiesta because of the mammoth crowd that attends the observance's events.

Through reaching countless youth and touching them with life-changing messages, and engaging them through entertainment and counselling; crime rate would decline and by extrapolation, Nigeria's image would improve; reasoned this royal father, who confirmed that this year's National New Yam Festival will open in five day's time, on 24 August to be precise.

A thinking man, Igwe Martins Ezeh has severally expressed the opinion that, given employment opportunities or legitimate means of livelihoods; it is possible that many perpetrators of kidnapping, armed robbery and other crimes would not engage in their current despicable occupations. He, therefore, revealed that henceforth, the annual yam festival would also provide forums for consultations; 'We all want good governance, we want jobs for our teeming youth.

Government wants people to avoid crime and be orderly; government also wants citizens to pay tax, so that it can continue to improve on provision of amenities and infrastructure. So, whatever the problem is, we want to discuss it and find solutions', mused Idu II; who added that apart from intellectual dimensions that have been introduced to add value to the fiesta; practitioners of numerous trades and vocations will also be part of the national yam festival.

'There will be stands for craftsmen, inventors, traders and even traditional medicine dealers; if you believe your product can cure barrenness, fibroid or whatever; we want to see it in action. And, where we are convinced that anyone's product or invention can contribute to improving our standard of living, we shall encourage that producer or inventor.

If it is about herbal remedy, we will liaise with NAFDAC (the National Agency for Food and Drug Administration and Control); if it is about car spare part or locally fabricated electricity generator, we know which agency to take the matter to; so that every Nigerian can eventually benefit from the creativity of a fellow compatriot. Our people are very talented, and tapping these talents would henceforth be part of 'Iwa ji Ndi Igbo' and in celebrating this festival we are thanking God for all the good things he has blessed us with', he expatiated.

All raring to go
The ancient town of Igbo Ukwu in Aguata Local Government Area of Anambra State is ready and raring to go, added the 'Igwe' of Igbo Ukwu, also fondly addressed as Idu II. As part of rounding off of preparations for the 2010 indaba's take-off, Idu II last Wednesday, 11 August led a delegation of select traditional rulers to the Abuja-based headquarters of the Nigerian Tourism Development Corporation (NTDC); where he revealed that all was set for the annual fiesta, which is billed to close on 28 August.

'Runsewe is an asset to the Igbo nation'
Speaking during the visit, where he lauded the monumental contributions of the NTDC in promoting and projecting the rich heritage of the Igbos, through sustained coverage of culture-related activities in the South-east, especially the up-grading and marketing of the Owerre-Ezukala Cave and Waterfalls; Idu II revealed, the delegation was in Abuja to brief NTDC Director General, Otunba Olusegun Runsewe and the Corporation, in general, on the current issues of development, festivals and the erection of tourists' relaxation huts at the site of Owerre-Ezukala Cave as well as the contributions of the NTDC in the promotion, marketing and hosting of the annual Owerre-Ezukala Cave and Waterfalls Annual Tourism Festival, which takes place in May.

Presidential testimonial
Speaking further, the Igwe of Igbo Ukwu in an infectious display of affection declared that the NTDC Director General, Otunba Olusegun Runsewe, 'is an asset to the Igbo nation', and that Nigeria needed more patriots like this NTDC helmsman. The Igwe, who went on to congratulate Otunba Runsewe on the latter's appointment as substantive Deputy Director General of Nigeria @ 50, observed that this appointment is further testimony of the exemplary qualities Mr. President  sees in Runsewe.

According to this crowned head; Mr. President saw in Runsewe the quintessential qualities he needs to make a success of Nigeria's Golden Jubilee celebrations; this, Idu II reasoned, is why the incumbent DG of the NTDC was elevated to 'this great office' (Deputy Director General of Nigeria @ 50).

Festival will facilitate re-branding
The Igwe of Igbo Ukwu, who subsequently invited Otunba Runsewe to the forth coming National Yam Festival holding from the 24 August to the 28th, remarked; 'Our indefatigable Director General, your  presence at the festival will not only make the event groovy but will help us to sustain the tempo already gained. This festival has the potential of reducing the ills of the society, especially now that our youths have turned to public menace like armed robbery and kidnapping.

Idu II implored the Orientation Department to 'help us get the youth back to the path of honour'. He rightly observed that it is only during a gathering like the National Yam Festival, where the youth and others will come in great numbers that one could be sure that the great gospel of embracing good cultural values bequeathed to Igbos by their great ancestors reached the target audience. 'The Igbos are great and hospitable people', he averred.

The monarch further added; 'Through this festival, the re-branding campaign will be more meaningful and useful too to the youths and generality of the populace'. This Igwe had another plea: 'We would like you to identify with us in our efforts to research, promote and preserve our great cultural, artistic and tourism potentials of the South-east.' He reminded that the Anambra Government had endorsed and adopted the New Yam Festival as State Event.

Idu is harbinger of blessing
The NTDC DG, while commending the traditional rulers for the visit; remarked, during his response, that; 'Anytime the Idu came, he always brought blessings along with  him', went on to thank Igwe of Igbo Ukwu for the prayer session presided over by the royal father during the courtesy call. The rapport based on love and mutual respect between the Igbos and Otunba Runsewe probably inspired the latter to declare he always felt at home anytime he was in the South-east.

Citing Dubai as a perfect example of a country that has successfully commercialized its tourism potentials, the NTDC boss, who is not only at home in the South-east but all over Nigeria through his detribalised disposition; seized the opportunity of the traditional rulers' visit to reiterate his plea to all Nigerians to eschew tribalism and other unwholesome sentiments and work together in order to move Nigerian tourism forward.

While stressing his support for Idu II and his people, Otunba Runsewe asked the traditional ruler to provide the design for the proposed huts to be built for tourists at Owerre-Ezukala Cave site. The NTDC chief further assured the Igwe that he was welcome to visit NTDC any day and any time.

Concluding, Otunba Runsewe promised that NTDC would sustain all tourism-related projects in the South-east as a strategy to reduce unemployment, crime and other social vices in the area.

2010 National Yam Festival Calendar
According to Mazi Okafouzu Ugochukwu, Chairman of Mbido Igbo Association, organizers of the festival; this year's celebrations will begin with Homage to 'Igwe' of Igbo Ukwu as well as HRH C. C. Umeaniba, Igwe of Azigbo on 24 August; followed by similar courtesy visit to Rev. Fr. Donatus Esiegbue Eze Muo on 25 August.

Other activities slated for 25 August includes lectures by Prof Pita Ejioffo and Dr. Catherine Acholonu as well as 'showcasing of New Yam' to the public. Prof Ejioffo is a former Vice Chancellor of Nnamdi Azikiwe University, Awka; while Mrs. Acholonu was Presidential Adviser on Culture during the Chief Olusegun Obasanjo Presidency.

President Goodluck Jonathan has been penned down as Distinguished Guest of Honour, while Chief Leo Elenaya, 'Ohadike' of Isseke has agreed to serve as Chairman of the National New Yam Festival 2010. The organizers have also listed Prof Dora Akunyili, Minister of Information and Communication as well as Mr. Abubakar Sadiq Mohammed, Minister of Tourism and Culture as Special Guests of Honour.

President General, 'Ohaneze' world wide, Ambassador Raph Uwechue; is slated as Father of the Day, with Anambra State Commissioner for Information and Culture as Chairman of the National Planning Committee.

The Director General of the Nigerian Tourism Development Corporation, (NTDC) Otunba Olusegun Runsewe has sent a letter of condolence to the Osun State Governor, Prince Olagunsoye Oyinlola, over the transition of the 'Ataoja' of Osogbo, His Royal Highness Oba Oyewale Matanmi III, who joined his ancestors on 6 August, 2010.

The late 'Ataoja', whose reign lasted for 34 years, 'would be remembered for his remarkable contributions to the development of Osun Osogbo Festival', Runsewe noted; reminding that it was during the reign of the recently departed monarch that the annual Osun Osogbo Festival was elevated to an internationally acclaimed event.

The letter of condolence, signed by the NTDC chief, further reads: 'the exit of the monarch will be felt by all and sundry because of what he stood for as a custodian of culture and tradition and as an apostle of tourism development in Osun State in particular and the nation at large'.

'It is noteworthy that during his reign, the Osun Grove was declared a World Heritage Site by UNESCO and that the Osun-Osogbo Festival now attracts tourists from all over the globe with increased business activities within Osogbo and its environs, an indication that the late 'Ataoja' was concerned with the welfare and development of his domain, in particular, and Nigeria in general', Otunba Runsewe further stated in the letter of condolence.

The NTDC helmsman observed that though the deceased king was a distinguished professional accountant, the late 'Ataoja' nonetheless made monumental impact on the Osun State cultural heritage, by projecting and marketing of Osun Osogbo Festival; through his wealth of knowledge and experience.

The condolence letter further reads: 'Indeed, it will be an understatement to say that the entire tourism industry would miss his wonderful contributions to the sector; NTDC would certainly miss this colossus of our cultural heritage, a detribalized first-class monarch'. The NTDC boss, who prayed for the repose of the late Ataoja's soul, asked; 'that the Almighty Allah grant His Excellency, the good people of Osun State, especially members of his family, the fortitude to bear the loss'.