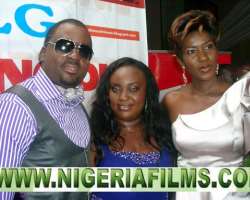 On my way to Abuja recently, I got a seat right beside the former managing director of Genesis Deluxe Cinema,Lekki,Mr.Keneth Mkparu.

For about one hour that we spent on air, I engaged him in a discussion over the state of Nigeria movie industry...call it film industry or Nollywood if you like.

We both agreed that there is a revolution taking place in the industry right now. something is gradually pushing Nollywood to the much expected level.

Now, producers are getting it right to a large extent that they need to spend good money to produce the movies, do adequate research or conference on scripts, proper editing, and most importantly, make it a standard production for cinema.Now before the movies hit the market or get pirated by some good for nothing people,it would have made impact and some good money from the cinema.

In this light, the contributions of the fore bearers of this new trend can not be under estimated.

Kunle Afolayan's Fingurine for instance was premiered in Lagos, New York and other major cities in the world. Gistmaster gathered that he made some cool millions of Naira. At least, its better than releasing it straight to the market, whereby the pirates would have printed their own copies and compete for the same market with the original work.

Stephanie Okereke also brought class to movie business in Nigeria. Her work "Through the Glass" was done with some Hollywood figures, the premiere was well attended and we are sure she made something good too. Chineze Ayanene also brought IJE, a movie featuring Omotola Jolade Ekehinde , Genevieve Nnaji, Clem Ohaneze and others.Recently,Emem Isong did it again when the masterpiece

she calls Bursting Out was also premiered at Silverbird Galleria.

Now everyone wants to come to the cinema to watch our own films just the way they do with box office hits featuring top Hollywood stars.

Now the standard of Nollywood films is getting higher and no one is prepared to just go and shoot anyhow movies again.Unlike before when we get to see over one thousand movies released in a month (without good script focus), the industry players are now doing big budget even if it means shooting just two films in a year!

Mkparu and I also agreed that the new re-training process embarked upon by top nollywood players at New York Film Academy has made a solid difference."Its not all about training people in the art,there is a need for a visual representation of the training as a project with the neccessary human and material support" Mparu (who is now the Managing Director of Film House, Lekki) said.

He also hinted that plans is already in top gear to bring quality cinema to every neighborhood in Nigeria.This would further encourage the cinema culture and the quality of our movies would be upgraded. He disclosed that there already a big mall coming up in Ketu soon and the Film House would be there, just as he disclosed that another one would also be located in Surulere.Cinema is not all about Lekki and Victoria Island alone, so many people are yearning for it too in other places, he pointed out.

Nollywood is on the match again. From what I have has seen and recorded in the last few months, then the revolution is here. Gistmaster call it "Nollywood Re-birth"