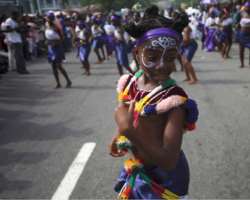 
San Francisco, August 12, (THEWILL) - As an acclaimed tourism destination in Nigeria, the Cross River State Government has stated its determination to introduce new innovations into one of its tourism products the annual Leboku new yam festival in Yakurr, and which it said shall be the fusion of the people’s culture and agriculture, with fantastic prizes lined up for best harvesters and winners of leboku competitions.

In a press conference at Ugep, the Headquarters of Yakurr Local Government Area, Special Assistant to Governor Liyel Imoke on Administration, Mr. Sunny Ude said government was ready to take the festival to great heights considering its cultural and tourism importance. He said events mapped out for the annual fiesta shall include female and male wrestling bouts, football competitions, inaugural lectures, exchange of visits and gifts.

Other features, Mr. Ude noted, will be the visitation to tourists’ sites, sensitization campaign on HIV/AIDS, cultural display by different cultural troupes as well as beauty pageant contests for Miss and Mr. Leboku 2010 to emerge. He said these shall culminate in the grand finale of the festival, which shall take place in August 17, 2010.

Besides, the Governor’s aide described as enormous, benefits of the event, and stressed that the festival has increased awareness on the need to return to basic – farming, apart from improving on the image of the nation and attracting investors into the State.

Also speaking, Paramount Ruler of Yakurr, HRH Obol Ubi Ujong Inah said Leboku is not a diabolic event but a celebration of God’s love, and appreciation to Him for granting the Yakurr people good harvest, just few months after planting season. He therefore appealed to Yakurr sons and daughters at home and in Diaspora to make use of the opportunity.

Co-sponsor of the fiesta, MTN, represented by Mr. Kester Ohahenye, Regional Manager, South-South said the festival falls under the company’s Fest plat-form, and that MTN has always identified with Cross River State Government in events of such magnitude, reiterating that the company seeks to tell the world that Nigeria is not the way it is painted outside. He believed that the rapport between the company and the State Government would be sustained.

Earlier, spokesman for Obol Lopon Advisory Council, OLAC, Mr. James Uket had said the traditional council has decided on a number of side attractions and that the fiesta as a whole would not loose its cultural content. He said the festival shall embrace the ten communities of the Yakurr nation, disclosing that farm products that shall be sold on the day of the grand finale shall be considerably subsidized.

Chairman of Yakurr Council Area, Hon. Ubi Itam Ettah, represented by Hon. David Ekpo, Vice Chairman, said the Yakurr people are ready to host the event, and therefore thanked the Cross River State Government for upgrading the leboku to give it an international touch.

The Leboku New Yam Festival is an annual event in the Tourism Calendar of Cross River State, that also includes the Obudu Mountain Race, Calabar Festival and Carnival Calabar.