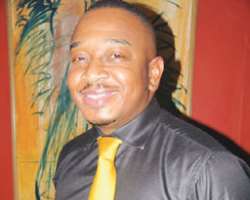 Olisa Adibua, host of the evening programme Top 10 Countdown on Cool FM, and also host of the first-ever Big Brother Nigeria, and director of programmes at Beat 99.9 FM, is a veteran broadcaster. Adibua, who spent 20 years in England before returning to Nigeria, discusses his passion with ANNA OKON

What is your assessment of the television broadcasting industry in Nigeria?

I have had the privilege of being involved in television from the point of view of the NTA. I worked with them for three years when I first came back to Nigeria. I also had the opportunity of working with some private television stations as well. I believe that television in Nigeria is not where it should be. I am also reflective, working in radio as well. You see what is happening in radio, private sector, Nigerian radio right is at international quality level. Television is lagging behind because radio is cheaper than television.

Why is radio cheaper?

Content is what it is all about; to create a content for a radio station is not the same thing as creating content for television. Now that's what people don't understand; that's what the NTA does not understand. Now I have heard some things down the line that the NTA has signed partnership with some Chinese companies and they are going to be receiving new transmitters from there. I hope so; the problem is that they don't understand that it is not about buying new transmitters, you have to invest in programming, content. Not just the NTA, some other private sectors are not also investing in quality programmes. You have to carve out a certain amount of your budget every year to create programmes.

How should this be done?

There was a time when the NTA always did that. They always did it internally, but I think those days are far gone. You look at what is happening in television around the world, you have CBS, NBC, and FOX, big stations, they commission programmes. A lot of programmes you see on TV in Europe and America are not made by the big stations; they are made by small independent companies. An hour of loss can cost CBS billions of dollars but the money comes back in advertising. Also the idea of NTA DG being a political appointee, you have to get people to understand that the place is not for some political members like you have to provide something for the boys. You have to get someone who understands television and programmes. It is very sad for me because I stopped doing stuff with NTA way back. I got involved with the first private television company called Clapperboard many years ago. I presented a programme for them for like three, four years and I left. I left television for a while and I said I can't come back to television unless I am coming back with something that has quality. That is why when I came back I came back with Big Brother Nigeria in 2006 and Naija Sings because I said to myself, 'If I look back in 10, 15 years, will I be proud of what I have done?'

What is the difference?

What we had to do then was to set a standard for quality in production, because we are in Nigeria, it does not mean we have to produce rubbish. What I do on radio is quality radio. Like my beat on Beat FM, I am raising the bar, I am telling them, yes, Ryan Seacrest is there, so and so is there but we are better here. Television has to come of age. First of all, NTA has no business collecting advertising, the government is supposed to give NTA subvention like the BBC gets from the British government. They should use that money, work with that money, let the other private stations grow; let them have that advertising money. But they are busy collecting money for programmes, what is that?

You are comparing us with the stations in Europe, do you think our economy and environment favour such comparison?

The economy is bad but people must be entertained. Entertainment is an essential part of life, you need it. If the reality is bad, you need to watch television and take your mind off the bad reality. The issue is that the right people should be in charge of the administration of the NTA because NTA is very important. I have seen a lot of DGs come and go and most of them have been disappointed. Look at what is happening around the world, and understand the formula.

What is your own idea of quality programming?

Production is about money. You watch Nollywood movies, Nollywood got to a point where they said, okay we have reached this point, what next? You watch a film you see the microphone hanging out, you watch a film there is no continuity; you see a scene, one guy is driving a car for four hours and they will have Part One, Part Two, Part Three of that scene.

Maybe we don't have the money.

So what do we do?

First of all, the producers have to have a plan. No one is going to lend you money for production if they don't know how the money is coming back. You could be artistic and the other man could be a crude businessman, you have to come together. In Hollywood, how do they get the money? How many billions of dollars did they spend on Avatar? Cameron does not have that kind of money, money came from somewhere. I have been lucky, I am artistic but I also have an eye on business, I don't put my money in a project unless I am sure the money is coming back.

Do you get money that easily from sponsors?

Yes, there are people ready to fund shows if you the artist are serious. If you give them a proper production plan and you tell them how the money is coming back, they are going to be ready to invest in the business. I have done a few proposals before, the sponsors will say, 'Fine. How do we get our money back?' I am not a financial whiz kid so what we do is that when we have a project, we call people who are professionals in that field. We call it playing it numbers cultures, they say okay, this is how it is done, this is the returns; the reality is that we can make it work by bringing in people who know about numbers. We have lawyers who understand our business; we have financial people who understand our business.

In the Nigerian film industry that is an all comers' affair, if you a professional stake your money how would you get it out?