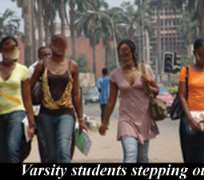 These days, one could hardly differentiate between serious students and “acting” students in our campuses.

But like the cliché that says the end justifies the means, the repercussion of their “past time” in school would tell by their final results (although it is also buyable. Students now have grades according to how much they can afford or how many lecturers, deans and HODs they open up their honey well for, to drill.)

Painfully, those whom their parents are well connected would get good jobs, after graduation, with little or no expertise in their area of specialization; while those who toiled day and night and burn the midnight candles hardly have such opportunities.

A chat with one of my good friends who returned from one of our tertiary institutions last week, revealed some of the incredible things babes do, just to belong, associate and compete with their 'high class' colleagues.

I couldn't believe what I heard. I remember how I toiled to help my parents raise my school fees.

Then, I did menial jobs to supplement my often insufficient pocket money. Some other decent babes engage in buying and selling sundry items like: gari, pants, bras, make up, fairly used clothes, popularly known as Okirika just to lighten the burden of their parents.

The reverse is the case these days. Undoubtedly, there are still decent female students in school but the percentage is decreasing as the day goes by.

According to my friend, Augustina Okoro, a 300 level student of Ebonyi State University, EBSU, their campus has become very interesting, especially with the girls popularly known as Aristos, (frolicking with men who are old enough to be their fathers, grandfathers and even great grandfathers.)

65% of the babes involved are from Christian homes, and as such may not have set out to become one. While 20% of them are from very poor homes but circumstances forced them into sex trade. Another 5% are influenced by peers, who always justify their action with the old saying of: “If you can't beat them, join them”. While the remaining 10% are girls from rich homes, whose quest for more money turned into Aristos.

My friend also relayed the story of one babe named Joy, whose father is a pastor based in Port Harcourt, but whose waywardness was far beyond imagination. She was the leader of a very deadly cult group and has other babes and guys under her control.

She bangs any guy that catches her fantasy. All she needed to do was to point the guy to members of her gang, who ensures other necessary arrangements are made to fetch her target. When she has enjoyed the guy to her fill, she dumps him and looks for another prey.

She was practically acting like the goddess of the whole school. She was also reported to be a chain smoker. There was nothing good about her, expect the fact that she was generous with her ill gotten money. She could help in solving your financial problems, depending on how close you are to her.

The weirdest thing about this particular hot babe was that all her hullabaloos and fierce looks and acts end right there in the school. Whenever she wants to travel home to visit her parents, she would get rid of her crazy hairstyles, make ups and dresses.

After an intense shopping for skirts and long sleeve clothes, she pretends to be the most virtuous and devoted Christian that her parents always wish her to be.

She returns to school after the holidays, only to dash out her 'sisterly' clothes and continue with her old ways.

There are so many other female students like Joy; those who are wolves in school but feign meekness at home or in the midst of family members.

These Aristo babes are so good at their trade that many influential men in the society struggle to have them, what with their expertise in the act of men snatching tricks.

Tina exposed some of their secrets when she asserted that most of them have charms to entrap the men. Once a man mounts and savours the sweet taste of their p…y, he would hardly remain in control of his senses, until the babe sets him 'free'.

Once they hit a big catch, they start living big. Competing amongst themselves; trying to keep trend of fashion. They can easily be identified with their hairdo, shoes, jewelries, perfumes, make ups, which are always very expensive.

The set of girls lose focus, and thus jettison the real reason they came to the university. Little wonder, we have ghost students and attaché students.

The ghost students are the ones that truly got admission to study, but lost track due to their excessive love for money. They no longer attend classes, or even sit for exams, yet they come out with higher grades.

But the attaché students are those who want to belong. In most cases, they couldn't make JAMB cut-off, or didn't even take the entrance examination, but want to 'flex' like other students.

These girls don't care, who they open their legs for, as long as he has the money to throw around. Be he married, single, old, fat, slim, just mention it, they don't care. They keep telling those who ask them, that all men are the same, that the only thing to differentiate them is the colour, size and shape of their third leg, dangling in between his thighs.

Afterall, woman thing no dey read meter, so they can go as far as they want, to sleep with any well loaded guy.

Once they have a new catch, they would tell you that they wan open office for the guy head. Meaning: They are out to suck the guy dry, financially.

Poor Tina, she told me that she's so unfortunate because in her hostel, more than 65% of the babes are Aristos. By weekend, the hostel would be deserted as the hustling babes go about their weekend sexcapades across the country.

They usually leave their belongings in her care because they must 'flex', to use their usual slang.

One other thing about these babes is that you dare not call them Ashewo or prostitute or you would be sorry for yourself.

It is only a fellow Aristo that is allowed to call another by that name, or any other degrading name at that. An attempt by a non member of the click to do same would land her in serious trouble.

As for how much they get from their magas and mugus, they would never reveal to anyone, except their ilk. All they do is to whisper in to your ears: “That maga dropped so much money”, leaving you to your imaginations.

The love of money is the root of evil; let our female students be warned.