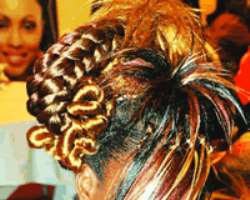 Recently, the mini Woji hall in Port Harcourt, Rivers State witnessed the South-South preliminaries of the Nigeria Hair Show 2010. Eight participants representing different salons from Port Harcourt, Aba and Uyo in Akwa Ibom State slugged it out in the wigs design category which was the deciding factor for the qualification of salons for the grand finale of the national hair stylist competition. The participants include Hyclass Salon, Etidores Beauty Salon, Steve Salon and AD Salon. Others are I Shine Beauty Salon, Bashiru Signature Salon, Daisy Salon and Supreme Beauty Salon.

They created heart-warming hair wigs designs, such as French short, side bob, side wave fringe and style fringe. At the end of the competition four salons qualified for the grand finale. They include Daisy Salon which came 1st and received a DVD player. The second position went to Steve Salon who went home with styling tools. The third and fourth positions went to Bashiru Signature and I Shine Beauty Salon, respectively.

All the wigs design were done with Schary products made by X-pression the supporters of the event.

The Project Director, Mr. Chukwumah Emmanuel, however, used the forum to encourage all beauticians nationwide to have more drive in skill acquisition and IT knowledge as it will soon be a needed skill for practice and growth.

The grand finale promises to be alluring, poise and glamorous.

The event was organized by Multi-devices Communications Ltd.