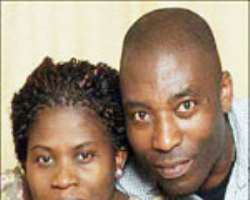 A few weeks ago, a baby girl, Nmachi, was born with white skin, blue eyes and blonde hair by black Igbo Nigerian parents.

According to Daily Mail, doctors at Queen Mary Hospital in Sidcup said that the baby was not an albino.

The 44-year-old father of the baby,Ihegboro, and his wife, Angela, were stunned when they saw their new baby.

Prior to the arrival of the white baby, the couple already had two black children. “We both just sat there after the birth, staring at her,” said Ihegboro, the father of the baby.

In the same vein, his wife, Angela, said, “She is beautiful; she's a miracle baby.”

Ihegboro further said, “My wife is true to me. Even if she hadn't been, the baby wouldn't have looked like that!”

According to a report, “Skin colour is believed to be determined by up to seven different genes working together.

If a woman is of mixed race, her eggs will usually contain a mixture of genes coding for both black and white skin. Similarly, a man of mixed race will have a variety of different genes in his sperm. When these eggs and sperm come together, they will create a baby of mixed race.

“But, very occasionally, the egg or sperm might contain genes coding for one skin colour. If both the egg and sperm contain all white genes, the baby will be white. And if both contain just the versions necessary for black skin, the baby will be black.”

So, how a black couple could have a white baby is still generating a lot of controversies and argument among Nigerians.

It is on this note that News Star went to town to seek people's opinions on this strange development. Their views are shocking and interesting.

Abiodun Cedric
It is shocking to see a black couple with a white child. One may say they have either adopted or mistakenly taken a white baby. I, therefore, would suggest a serious DNA test to ascertain the real parents of that white baby.

George O.
In short, my wife would not even tell me that she has been delivered of such a baby. I will abandon her and the baby in the hospital. I believe that she didn't know that the baby would be very fair.
Are they claiming to be the parents of this white baby for their names to appear in the Guinness Book of Record?
I pray it does not happen to me because I will not want to do what people would not like.

Onwa Oyoko
Can God visit or do something in an unusual way? Is it possible? This is unbelievable.

U D
It could be a miracle baby because I believe in miracles. There was a time I read a story of a black and white couple who gave birth to twins and one of the babies was white while the other was black. I won't suspect my wife of cheating because I trust her and believe that she cannot cheat on me. Also, I won't question God if He decides to bless me with a white baby.

F. Ogwu
It may be a non-deliberate child swap. These things happen. However, the DNA test should confirm this. But I don't think that the woman slept with another man because the baby is not half-caste.

Chika Ime
Is it be possible for a black woman to deliver a blonde, blue-eyed white baby? Wonders, they say, shall never cease.
Hmm! Wow! I wish them well.

Tope Ayoola
It is not impossible for a black woman to have a white baby because this is an end time. There was a time I heard that an animal delivered something that looked closely like a human being, though I didn't press further to ascertain whether it was true or not.

Commy Kay
Did you say that a baby born by black parents have blue eyes and blonde hair? Please, give me another gist!
Of course, I don't doubt the abilities of God to do wonder, but have they really gone for a DNA test? If they have, then, it sure is a miracle.

Mary Asuquo
What? Where did it happen? I would believe the story if it happened in a remote village in Nigeria. Something is wrong somewhere since it happened in England. But if medical reports confirm that the white baby truly belonged to the Nigerian couple, it means that the human reproductive system is undergoing transformation like the climate.

Ndidi
Without being rude, are you sure that that woman did not sleep with a white man? The man is claiming that his wife is faithful. How can he prove it? Only a woman knows the man that impregnated her, so he should ask the woman or the hospital what happened since he wasn't in the delivery room.

The story revealed that Mr. Ihegboro asked them whether or not the baby was his before he accepted the paternity of the baby. It is strange since the baby is not an albino.