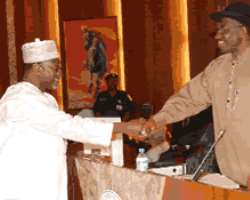 Jega and Goodluck
The new team at the Independent National Electoral Commission (INEC) appears to have concluded plans to cut down the commission's staff strength. The impending sack has become a common topic among workers who now gather in small groups discussing the fate that might befall them.

The staff rationalization, it was learnt, would cut across all cadres within the commission.

It was also gathered that the decision to cut down staff strength was based on the need to reposition the commission and 'also weed out bad eggs.'

Daily Sun gathered that some of the staffers to be affected were those with bad records, or any other wrongdoings bordering on issues of election or those staffers with proven cases of links with politicians.

Already, sources hinted that the Heads of Department (HODs) had been asked to liaise with the personnel department of the commission to compile a list of staffers who would be relieved of their appointments.

INEC Chairman, Professor Attahiru Mohammed Jega, had also given a hint of the workers' retrenchment, when he received the leadership of civil society groups that paid him a courtesy call last Friday.

He said: 'There is need for re-positioning and re-organization to ensure that it can cope with the challenges of the election. We will do this with justice and fairness to achieve the level of efficiency that cope with the demands of the next election.' To kick-start the process, Jega had two weeks ago sent Mr. Andy Eziani, who was chief press secretary to the former chairman, Maurice Iwu, on suspension.

It was learnt that Eziani had a case in court over alleged corruption and the new team reportedly relieved him of his post to, according to a source, 'enable him sort himself out.' Daily Sun could not confirm the number of staffers to be affected but a source said, 'It will be sizable.'